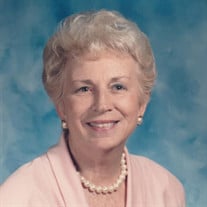 Winifred Hope Moore Knox, (Boozie) March 25, 1926 – March 15, 2022 Born in Norfolk, Virginia in 1926, Boozie was a member of what would be coined “The Greatest Generation”. As such, she had the can-do spirit epitomized by those whose childhoods spanned the Great Depression. Their early adulthoods were honed by immense patriotism, duty, and selflessness required by the rigors and sacrifices of World War II. She moved to St. Simons Island, Georgia with her parents Hugh Carlton Moore and Eulalia, (Eula), Young Moore, in 1929. Her father was a golf greenskeeper and golf pro who had been hired to supervise the construction of the original golf course at Sea Island, Georgia. It was here in coastal Georgia that she was affectionately nicknamed Boozie by her brother Hugh. Most of her friends would only know her by that zany name for her entire life. A few years later, her father was transferred to Albany, Georgia as Club Pro at Radium Springs Golf Club. Boozie lived most of her life in Albany, graduating from Albany High School in 1943. She had been voted Best Dancer and was on the Majorette Corps. She, her siblings, and friends spent their summers swimming and frolicking around Radium Springs. During WWII, she volunteered and served at the USO, while enjoying the dances and the music of the era. She attended Asbury College where she studied Bible and voice. She loved to sing and share the Gospel message of Salvation through Jesus Christ. Returning to Albany in 1952, she continued her voice training with First Baptist Church Choir Director Mrs. O.D Culpepper. In 1954, she met and married her husband of 55 years, James Edgar Knox, Jr. (Jim). They were faithful members of First Baptist Church choir, Sunday school, Women’s Missionary Union, and JOY fellowship. Boozie would also perform sacred concerts in churches in the southwest Georgia area and was frequently a guest soloist at First United Methodist church’s Wednesday night supper and Bible study. She was also a member of Avalon United Methodist church where she taught Sunday School. Boozie joined Bob Pharis as pianist in the Albany prison ministry and went on to record an album of Christmas and Gospel favorites in 1973. Boozie’s love for her Savior led her to teach the young married couples Sunday School class. She continued the many friendships made here for the rest of her life. After becoming a member of First Assembly of God church, Boozie continued sharing her beautiful voice in the choir and taught the boys and girls 5th grade Sunday School class. In her final years Boozie attended Midway Presbyterian Church, Powder Springs, Ga with her family. While working at First State Bank, at age 57, she finished her degree in Education from Albany State University and went on to teach the 6th graders at Highland Magnet School. Her passion for teaching, love for her students, and thirst for travel allowed for many golden moments for learning. She would frequently share pictures, videos, stories and food from Europe, Israel and the United States. Her students would usually request to watch documentaries over fictional stories. Boozie opened their eyes and ears to learning history and especially American history. She had a gift for motivating students to achieve their best at their studies, and her homeroom class went on to win the “May Day” competition 6 years in a row. Her devotion to her students and teaching didn’t go unnoticed as she was awarded “Teacher of the Year” in Dougherty County. Her fun side was evidenced by her Kentucky Derby Day dress wear and hats; impromptu picnics with her children; camping trips; marathon card games, where she was given the title, “The Barracuda”, because no one could beat her. In retirement, she and husband Jim continued traveling and enjoying church work. She took up golf again and played frequently returning to Sea Island to enjoy her favorite sport. She loved “Braves” baseball and would attend many games with her church, family and friends. It was not unusual for her to call brother Hugh to converse about baseball, golf and other sports. Until the end of her life; she would attribute her blessings and talents to the Grace of God. Her faith in the Lord Jesus Christ directed every step of her life. She was deeply loved by her family and her friends, many of whom had been with her since childhood. Her children called her “mama”, her grandchildren called her “Grandma and nanny” and her great grandchildren called her “nanny boo boo”. She is already greatly missed. We love you and miss you Mama! We will see you in Heaven one day. Boozie is survived by her three children: Gail K. Turner (Lawrence), James E. Knox, III (Ed), and Sally Knox; one grandson: Casey Turner (Lindy); two granddaughters: Jordan Walker (Jarrod) and Leah Knox; four great grandsons; Knox Walker, Hugh Walker, Clive Turner and Duke Turner; a great granddaughter Violet Turner; nieces & nephews: Belinda Morrison, Jim Knox, Margaret Chambers, Bobby Knox, Knox Dobbins, Bobby Dobbins, Ursula Weiland, Chuck Long, Nancy Rowe, Susan Baten, and Janice Applegate. She is predeceased by her parents; Husband James Edgar Knox, Jr.; daughter in law: Julie Carter Knox; sisters: Sula Long and Doris Green; sisters-in-law; Faye Moore, Maude Francis Knox and Anne Dobbins; brother Hugh Moore, brothers-in-law Charlie Long, Chester Green, and Robert N. Knox; nephews; Stan Moore, Terry Moore and Bill Green, niece Betty Haines and great niece Katie Findlay The funeral service will be held Saturday March 26, 2022 11:00AM at Kimbrell-Stern with interment to follow at Crown Hill Cemetery. The family will receive friends Saturday one hour before at Kimbrell-Stern. The family would like to thank Vitas Hospice and Virginia Mutasa for the love and care that was provided for her. In lieu of flowers, if desired, donations in Boozie’s memory can be made to The Gideons, Camp U-Albany West, P.O. Box 72341, Albany, GA 31708 or Samaritan’s Purse, www.Samaritanspurse.org,. or P.O. Box 3000, boone, NC 28607.

The family of Winifred Moore "Boozie" Knox created this Life Tributes page to make it easy to share your memories.

Send flowers to the Knox family.