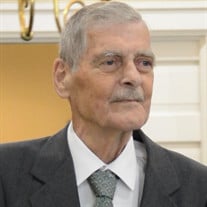 William Barrett Rowley Of Albany, GA, passed away on Wednesday, June 10, 2020, at the age of 84. Bill was born on December 15, 1935, in Minneapolis, MN, the son of Richard and Agnes Rowley. His family moved when he was four to San Mateo, California. He attended JSerra Catholic High School in San Mateo, where he graduated in the Class of 1953. He attended college at the University of New Hampshire in Durham, graduating with a degree in Horticulture. Bill joined the United States Marine Corps in 1959 after graduating college earning a commission as a Second Lieutenant. He served three tours in Vietnam participating in five campaigns and earning the Bronze Star Medal with “V” device. He retired from service as a Major in June 1980 after serving 21 years, receiving a Navy Commendation Medal. During that time he earned a Master’s degree in counseling from the University of Virginia at Blacksburg. After retiring, he served in several positions, before retiring as a counselor with Diversion Center. Bill was active in Kairos and served over 15 years with the Prison Ministry at St. Teresa’s Catholic Church. He was an avid gardener and enjoyed experimenting with day lilies by cross pollinating them. Above all, he was a dedicated husband, father and grandfather who cherished his time spent with family. He is survived by his wife, Joan Rowley, his children Loretta (Mark) Wingate, Bill (Stacie) Rowley, Dennis (Charlise) Rowley, Richard (Denise) Rowley, Kevin (Renae) Rowley and Diane Rowley; step-children Charles (Michelle) Mattocks, Robert (Paige) Mattocks, Richard (Margot) Mattocks; grandchildren Brandon, Whitney, Meredith, Tinsley, Barrett, Hayley, Jordan, Nathan, Dakota, Jocelyn, Sierra, Tristan, and Meadow; step-grandchildren Joshua, Owen and Braxton; two great-grandchildren; sisters Kathie Sullivan, and Martha Young; brother-in-law David (Debra) Wagner; and numerous nieces and nephews. Bill was preceded in death by his parents; a brother Richard; his mother-in-law Joyce E. Wagner and a daughter-in-law Krista A. Mattocks. A private memorial service was held and a private internment was conducted at the Andersonville National Cemetery. Memorial contributions may be made to the Prison Ministry at St. Teresa’s Catholic Church, 421 Edgewood Lane, Albany, GA 31707 or to Kairos of Georgia at Morris Rainey/Treasurer of Calhoun Chapter of Kairos, 2214 Arrowwood Drive, Albany, GA 31721-2051 (Be sure to mention it is in memoriam of Bill Rowley and include your name and address to acknowledge the donation.).

William Barrett Rowley Of Albany, GA, passed away on Wednesday, June 10, 2020, at the age of 84. Bill was born on December 15, 1935, in Minneapolis, MN, the son of Richard and Agnes Rowley. His family moved when he was four to San Mateo, California.... View Obituary & Service Information

The family of Mr. William Barrett Rowley created this Life Tributes page to make it easy to share your memories.

William Barrett Rowley
Of Albany, GA, passed away on Wednesday,...

Send flowers to the Rowley family.