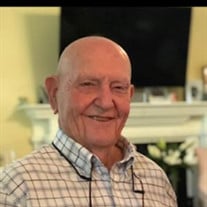 The family is at the residence of Mr. and Mrs. Tod Lanier 2611 Birchwood Dr., Albany, GA 31721. William Donald “Donnie” Lanier—92, of Albany—died Friday, April 29 at Phoebe Sumter in Americus. His funeral service will be held Tuesday, May 3rd, 12:00 PM, at Byne Memorial Baptist Church with Reverend Mark Jackson Officiating. Immediately following, a graveside service will be held at Riverside Cemetery. Visitation with family will be held at the church one hour prior to the service at 11:00 AM. Mr. Lanier was born September 25, 1929 in Albany, GA to Jefferson Bradwell Lanier and Angeline Knapp Davis Lanier. He graduated from Albany High in 1947 and attended North Georgia College for two years before transferring to Georgia Tech, where he received his Bachelor’s in Civil Engineering. He then served 2 years in the US Army with the Corps of Engineers during the Korean War. When he returned to Albany, he worked in the private sector as a civil engineer for several years before beginning a career with the City of Albany—first as City Engineer, then as Director of Public Works for over thirty years before his retirement in 1989. He filled in at Byne Christian School as a high school math teacher for several years during the 1990s and 2000s, tutoring many as a “hobby” (pro bono) for many more years at the school and in his home. Mr. Lanier was first a member of First Baptist Church where he taught the youth, young adults, and RAs. He became a member of Byne Memorial Baptist Church in 1957, where he served faithfully in many roles and capacities until his death. He taught hundreds of Bible classes, including Sunday School, Training Union, Wednesday night classes, small at-home classes, and anywhere that he could share his extensive knowledge and passion for God’s word, pointing others to a relationship with Christ. At Byne, he served in many capacities—as a deacon, member of the building committee, pastor search committees, and ESL teacher. He and his wife Sylvia participated in 17 separate mission trips across the globe, and taught Bible studies at the Autry and Calhoun state prisons. He was also active with the Gideons for many years. Outside of his church interests, Mr. Lanier was known as a wonderful family man and father to his three children, 7 grandchildren, and 6 great-grandchildren. He was respected, loved, and admired by all who knew him and was a mentor and role model to so many. He was known especially for his integrity, character, humility, and his servant’s heart and love for others. Mr. Lanier’s other interests and hobbies included YMCA volleyball, church league softball, fishing, canoeing, camping, nature photography, birdwatching, woodworking, yardwork, and spending time with his family. He also coached little league and pony league. He was known for making hundreds of trips down the Flint River in his canoe paddling family, friends, and young adults for fishing and recreation. He loved outdoors and nature. He was a member of Albany Audubon Society, running bluebird routes, and Albany photography clubs. In his last few years, he loved his senior Albany YMCA exercise class that he attended four times per week. Mr. Lanier was preceded in death by his parents, his brother Bradwell Lanier, and his wife Sylvia Sue Smith Lanier. His survivors include children Lewis Tod Lanier and wife Kyoungah Kim Lanier; David Charles Lanier and wife Cathy Lynn Lanier; Sue Angeline Lanier Freeman and husband Greg Freeman, all of Albany, GA. His grandchildren are Amanda Leigh Lanier Fagiano and husband Anthony Fagiano; Nathan Donald Lanier and wife Anna Burns Lanier; Andrew Martin Lanier and wife Brittany Poplin Lanier (Shalimar, FL); Lanier Allen Freeman (Americus, GA) and Kendyll Ashley Freeman (Lexington, KY); and, Rachel Hwayeon Seo and Hannah Seungyeon Seo (Seattle, WA). He also leaves behind 6 great grandchildren under the age of 7. He leaves behind a wonderful legacy and name to his family. In lieu of flowers, the family asks that donations be made to Byne Memorial Baptist Church or the Gideons ministry. You may sign the online guestbook and share your memories on Kimbrell Stern’s website at www.kimbrellstern.com.

The family of William Donald "Donnie" Lanier created this Life Tributes page to make it easy to share your memories.

Send flowers to the Lanier family.