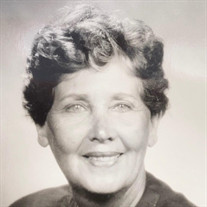 Virginia Holmes Reynolds, age 93, passed away peacefully on January 26, 2022. Virginia was a native Atlantan. She met her beloved Zahner at Courts & Company where they worked together, and married June 27, 1959 at All Saints Church. The couple moved to Brookwood Hills in Atlanta where they raised their three children. Virginia loved her neighbors and neighborhood, and started a rewarding career in real estate with Harry Norman Realtors. She was consistently among the top agents, and was interviewed by Good Morning America. She was a member of the Atlanta Garden Club and the Piedmont Driving Club. After moving to St. Simons Island in 1994, Virginia continued working with Culver & Deloach Real Estate. She and Zahner relished in coastal living. They had a house built on the marsh and enjoyed their beautiful view, gardening, dogs, neighbors, beach living, and visiting family. They joined and were very active in Christ Church. Virginia had many hobbies including fishing and crabbing. A loved one recently described her technique and skill at maneuvering many crab lines as 'pure joy'. She also enjoyed playing cards, especially bridge. A longtime volunteer, Virginia made beautiful embroidered dolls for children in need. She loved music and took up guitar lessons at age 70. Virginia moved to Albany, Georgia in 2010 to be closer to her daughter Virginia and four of her grandchildren. She was a devoted and loving mother and grandmother and was very active in their lives. She joined St. Paul's Episcopal Church and regularly attended YMCA classes. Virginia loved people and made everyone feel that they were the most special person in the world. Zahner preceded her in death in 2007. She is survived by children Virginia Langstaff (Tom), Brad Reynolds (Rebecca), and Julia Maximo (Vince), and her grandchildren Lindsey Langstaff Cynecki (Bill), Pete Langstaff, Thomas Langstaff, Reynolds Langstaff, Zahner Reynolds and Asher Reynolds. Virginia will be remembered for her passion for life. She will be dearly missed by many. A private graveside service was held at St. James Cemetery in Marietta, Georgia.

Virginia Holmes Reynolds, age 93, passed away peacefully on January 26, 2022. Virginia was a native Atlantan. She met her beloved Zahner at Courts & Company where they worked together, and married June 27, 1959 at All Saints Church. The... View Obituary & Service Information

The family of Mrs. Virginia Holmes Reynolds created this Life Tributes page to make it easy to share your memories.

Send flowers to the Reynolds family.