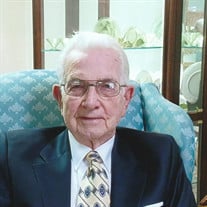 Tinsley Beck Dozier, Sr., “Brother” died at Tallahassee Memorial Hospital, Friday, September 4, 2020. His funeral service will be at 11 AM on Monday, September 7, 2020 at Kimbrell-Stern. The Reverend Dr. Butch Knight will officiate. The interment will be at Morgan Cemetery at 2 PM. The family will receive friends at Kimbrell-Stern on Monday prior to the service beginning at 10 AM until the funeral hour. Mr. Dozier was born June 11, 1926, in Morgan. He has resided in Albany since 1952. He graduated from Morgan High School. He served in the U. S. Navy during World War II in the North Atlantic aboard the Destroyer, U. S. S. Sutton. He worked as an adjuster for Commercial Credit in Savannah prior to moving to Albany and opening and operating Dozier’s Sports and Hobby Shop in downtown Albany. He eventually opened new businesses, Albany Background Music, Inc. and Audio South of Macon. He was a realtor with Allen-Owens Realty for a brief time. Following a brief retirement, he opened and managed A-1 Lock and Key in Albany. He was a member of First Baptist church and the Adult IV Sunday School class. He is survived by his wife and childhood sweetheart of 67 years, Eloise Adams Dozier, his son, Tinsley Beck Dozier, Jr., his daughter, Kimberly Dozier Johnson, both of Albany, his granddaughter, Meigan Johnson Miller (Clint), of Gray, Ga., his grandson, Walker Johnson (Kayla), of Warsaw, In., 3 great grandchildren, Nora Miller, Julia Miller and Marshall Miller, and a nephew Don Dozier (Bonnie) of Waycross. He is preceded in death by his father, Francis Cooper Dozier, Sr., his mother, Jewel Mansfield Dozier, of Morgan, and his brother, Francis Cooper Dozier, Jr. of Albany. Mr. Dozier, affectionately known as “Brother Dozier” and “Daddy D”, was a kind, humble, and gentle man. He was a loving husband, father, grandfather, and great-grandfather who loved his family and was loved and cherished in return. When you think of Mr. Dozier, you think of love, kindness, and compassion, and his impeccable integrity. Steadfast and genuine, he always led by example for his friends and family. He enjoyed traveling, golfing, tracing his genealogy, and spending time with friends and family. He was passionate about sharing his family memories with his family. He also loved watching the Atlanta Braves and the Georgia Bulldawgs. He enjoyed his nightly conversations with God, whom he considered his great “Buddy”. He will be deeply missed. Those desiring may send memorials to a favorite charity or the First Baptist Church of Albany, 145 Oakland Parkway, Leesburg, GA 31763.

The family of Mr. Tinsley Beck Dozier, Sr. "Brother" created this Life Tributes page to make it easy to share your memories.