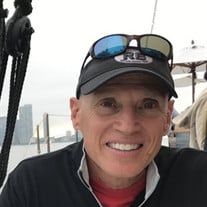 Timothy Andrew “Andy” Cooper, 62, of Albany, Ga. lost his battle to glioblastoma on September 20, 2020 at his home surrounded by his wife and children. Andy was born in Columbus, Ga. on January 12, 1958 to Gary “ GC” and Sarah “Sissy” Cooper. He graduated from Westover High School in 1976 and Georgia Tech in 1981 with a degree in Building Construction. He is married to Lindsey Giles Cooper. Shortly after college, Andy moved back to Albany and began Gary Cooper and Sons Construction. Andy held board positions on the Homebuilders Association as well as State Licensing Board for builders. He was a member of Porterfield United Methodist Church and Rotary International. Andy was a devoted and loving husband, who enjoyed spending time with his family and friends and could often be found running or riding his bike. Being an avid athlete, Andy participated in multiple running, cycling, and triathlon events including becoming a double Ironman. Andy and Lindsey found much comfort and peace at their “Happy Place” in Laguna Beach, Fl. Andy’s life seemed too short to many, but those who were touched by him understand that the quality of his existence far exceeded the quantity of time in which he lived. His loving and contagious smile and laugh brought much joy to his family and friends. Survivors include his wife, Lindsey Giles Cooper, his children Drew (Laura) Cooper, Claire (Steve) Leslie, Zach (Hannah Tucker) Cooper, his grandchildren Leyton Leslie and Andrew “Andy” Cooper, and his brothers Mike Cooper and Danny (Sharon) Cooper. Those desiring may send memorials to Fuller Center for Housing, Inc. 701 S. Martin Luther King, Jr. Blvd, Americus, GA. 31719 or the Glioblastoma Foundation P.O. Box 62066 Durham, NC 27715 glioblastomafoundation.org There will be a Celebration of Life to be announced at a later date due to covid restrictions.

The family of Timothy Andrew "Andy" Cooper created this Life Tributes page to make it easy to share your memories.

Send flowers to the Cooper family.