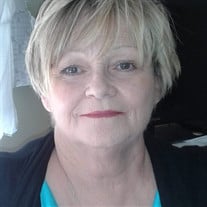 Teresa Darlene Stanley Brookshire, 61 died Thursday, September 12, 2019 at Phoebe Putney Hospital. Funeral services will be held Sunday, September 15, 2019 at 2:00 PM at Kimbrell-Stern. Visitation will begin at 1:00 PM at Kimbrell-Stern one hour prior to the funeral. Interment will follow at Riverside Cemetery. Rev. Steve Hurley will officiate. Mrs. Teresa Brookshire was born on January 19,1958 in Wise VA. She graduated from Lithia Springs Comprehensive High School in 1978. She moved to Albany, GA in 1979. She had a battle with cancer and won the fight the first time in 2017. She was a loving mother, grandmother and sister. She was always there to nurture and care for her loved ones. Teresa loved to play Canasta and was a beast in Scrabble. She enjoyed music and dancing. She was very close with her family and loved them dearly. She was surrounded by family when she passed away peacefully on Sept 12, 2019. Survivors include her daughter, Megan Brookshire and her husband, James Reeves of Kings Mtn, NC, 5 grandchildren, Matthew Holbrook, Alexis Brookshire, Kendall Reeves, Hayden Reeves and Ainsley Reeves, 5 brothers, Terry Stanley of Stockbridge, GA, Randy Stanley and his wife, Debbie of Barnesville, GA, Michael Stanley of Hopeful, GA, Norman Stanley and his wife, Lois of Marion, IN and Jeff Stanley and his wife, Corie of Villa Rica, GA. Teresa was preceded in death by her parents, Homer D. Stanley, Sr., and Joyce Stanley Lyerly, a son, Curtis “Trent” Brookshire, 2 brothers, Homer D. Stanley, Jr., and Jimmy Louis Stanley, Sr. and a sister, Catherine D. Stanley. To share your thoughts with the Brookshire family, you may visit our website at www.kimbrellstern.com.

The family of Mrs. Teresa Stanley Brookshire created this Life Tributes page to make it easy to share your memories.

Send flowers to the Brookshire family.