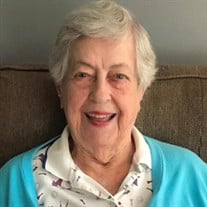 Susan Pendleton Everett, lovingly called “Gutmama” by her grandchildren, died suddenly January 9, 2022, at the age of 93. She was born July 11, 1928, and was adopted into the loving family of William Frederick Pendleton and Clyde Thomas Pendleton of Valdosta, GA. Susan graduated from Valdosta High School and attended Bessie Tift College for one year. She worked as a telephone operator in Columbus, GA until she met her husband, Robert W. Everett who was stationed at Moody Air Force Base in Valdosta. Within a week of their first date, he asked her to marry him – and she laughed. They were married in July of 1952 and had 62 years together as husband and wife. Together they had 2 children: Suzanne and David. Susan was a faithful servant to all. She lit up a room just by being in it and made sure everyone around her had what they needed. She was the better half to Bob as they served 25 years in the Air Force and Army being stationed throughout the southeastern United States as well as in Taiwan, France, and Korea. During their time in Korea, they became supporters of the ministry Youth with A Mission and continue that relationship to this day. Susan loved to sing and shared her talents as a member of community and church choirs. After moving to McCormick, South Carolina in 1993, they became active members of their community and the First Baptist Church. Susan moved to Albany in 2017 after the death of her husband. Living at Century Pines she became the unofficial Activities director and “Bingo Queen”. Susan is survived by her daughter Suzanne Unger and Gary Unger, her son-in-law of Leesburg, Ga; her grandchildren Andy Unger of Senoia, Ga and Sara Unger of Valdosta, Ga; her sister Jean Wilson of Hahira, Ga; brother-in-law Paul Everett and his wife Pat of Charlotte, NC and brother-in-law Gene Everett of Crawfordsville, Ind. In addition to her parents, Susan was preceded in death by her husband Robert W. Everett (Bob), a son, David Wayne Everett; her brothers, Francis Pendleton, and Fred Pendleton; her sisters Mary Catherine Coffey and Mary Gaines. The family will receive friends from 10:00 to 11:00 AM on Wednesday, January 19, 2022, in the sanctuary of First United Methodist Church of Albany, GA. A service of celebration for Susan will follow at 11:00 AM, with the Reverend Gary DeBerry and the Reverend Anna Miller officiating. Burial will be at Andersonville National Cemetery in Andersonville, GA at 2:00 PM. In lieu of flowers, memorials can be made to Youth with a Mission, P.O. box 1025, Grayson, GA 30017 You may share your own special thoughts and memories with the family by visiting Kimbrell-Stern’s website at www.kimbrellstern.com.

Susan Pendleton Everett, lovingly called &#8220;Gutmama&#8221; by her grandchildren, died suddenly January 9, 2022, at the age of 93. She was born July 11, 1928, and was adopted into the loving family of William Frederick Pendleton and Clyde... View Obituary & Service Information

The family of Susan Pendleton Everett created this Life Tributes page to make it easy to share your memories.

Send flowers to the Everett family.