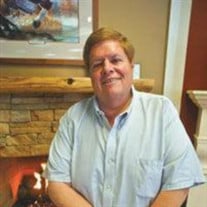 Steven William Holloway, affectionately known as “Papa Steve,” 63, passed away at Phoebe Putney Memorial Hospital on Sunday, May 23, 2021, in Albany, Georgia. Visitation will be held at Kimbrell- Stern Funeral Home on Wednesday, May 26, 2021 from 6-7:30 p.m. A memorial service will be held Thursday, May 27, 2021 at Porterfield United Methodist Church at 11 a.m. with Wesley Marshall officiating. Interment will follow at Crown Hill Cemetery with Mark Holloway, Wilson Holloway, Roger Herrington, Will Kendrick, Justin Strength and Jase Wingate serving as honorary pallbearers. Online visitors may sign the guest register at www.kimbrellstern.com. In lieu of flowers, memorials may be made to the Shepherd’s Center Foundation, 2020 Peachtree Road NW, Atlanta, Ga. 30309 with the memo Steven Holloway or The Rail Passengers Association, 1200 G St. NW, Suite 240, Washington, DC 20005 or The Arc of Southwest Georgia, P.O. Box 71026, Albany, Ga. 31708 in memory of Steven Holloway. Steven was born July 8, 1957 in Albany, the son of Dan Holloway and the late Alice Julia Sloan Holloway. He was a graduate of Deerfield Windsor School, Class of 1976. He then attended Albany Junior College, where he went on to become SGA President. “Food, family and fun” were Steven’s motto. One that was a common thread throughout his life. Following his college graduation, Steven went to join his family in the propane business at Modern Gas Company. There, he became extremely active in the Propane Association, making lifelong friends along the way. He was named the Georgia Propane Gas Association President in 1995 and was the Chairman for numerous committees. He went on to become the National Propane Gas Association State Director from 2005-2014, while serving as an Executive Committee Member from 2009-2012 and the Member Services Committee Chairman from 2011-2013. While serving the GPGA, Steven also dedicated his time to the Jaycees, where he was also President for a number of years. In addition, he served as Board Member for the Arc of Southwest Georgia and was a member of Porterfield United Methodist Church. Family was everything to Steven and he often took them along to conventions held by his numerous positions. If a convention wasn’t being held, a trip was being planned; usually by railway. He was an avid lover of Amtrak and took every opportunity to support them. If the rail cars could talk, many stories would be told of Steven, his family and the shenanigans that took place from the trips to New Orleans, New York or San Diego. Steven loved a holiday gathering as well, and would often help curate the menu, as food was part of his motto. Rather it be a chowder served at Christmas or a fondue at Easter, he always had a spot at the head of the table and recounted stories from years past. No family dinners were complete without him. He will forever have a spot at the table that belongs to him. Survivors include his father, Dan Holloway of Albany; his daughters, Katie Herrington (Roger) of Douglas, Ga., Callie Kendrick (Will) of Barnesville, Ga. And Jenny Holloway of Denver, Colorado; his brothers, Wilson Holloway (Donna) and Mark Holloway (Glenda) of Albany and his grandchildren, Emma Rose, Preston, Lincoln and Houston, along with a host of nieces and cousins. Steven was preceded in death by his mother.

The family of Steven William "Papa Steve" Holloway created this Life Tributes page to make it easy to share your memories.

Send flowers to the Holloway family.