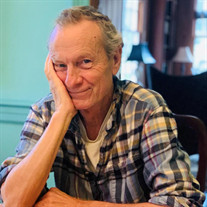 Stephen Ferrell Hinton, 68, died peacefully at his home in Albany, Georgia, Sunday, February 28, 2021, after a lengthy illness. Born June 15, 1952, in Chattanooga, Tennessee, to the late James Thomas Hinton, Sr. and Frances Lovett Holmes, Steve grew up in Atlanta and Tampa. He graduated from Jesuit High School, Tampa, in 1970, and from Vanderbilt University with a degree in Art History in 1974. He and college classmate, Bronwyn Semmer, married in the fall after graduation. As newlyweds they lived and worked in Athens and Valdosta before moving to New York City. There he painted and showed his work out of a Chelsea studio while working for Frank Macintosh and Peter Barton at Henri Bendel. After four years in New York, they settled in Albany in 1982 to work with his father and brother at Jim Hinton Oil Company of Georgia and to start a family. He returned to painting full time in 1997. Steve painted his entire life and created his first mural on the back wall of his closet, age six. Life delighted Steve. He shared that delight with others and on canvas. He painted and drew what he loved: family, friends, parties, dogs, kids, Southern landscapes and architecture…frequently all in the same artwork. His work and life were full of hilarity, story and hospitality. If he made fun in a painting, he did, indeed, make it fun. His work has been shown in New York, Albany, and throughout the Southeast. Steve served as a lifetime trustee of the Albany Museum of Art. Steve made countless friends and kept them throughout his life. Many of them navigated his illness with him, keeping him good company throughout, propping up his joyful spirit, and adding balm to the painful parts, for which his family is deeply grateful. He was preceded in death by his brother, James Thomas Hinton, Jr. He is survived by his wife, Bronwyn; two daughters, Chloe Hinton (Harrison Greene) of Albany and Teddy Dubose (Cody) of Auburn, Alabama; three grandchildren, Louise and Edwin Dubose and Frances Greene; beloved in laws, nieces and nephews, and his dear cousins. No public service will be held at this time. A memorial is being planned for a future date. Donations may be made in his honor to The Albany Museum of Art, 311 Meadowlark Dr. Albany, GA 31707, 229-439-8400.

The family of Mr. Stephen Ferrell Hinton created this Life Tributes page to make it easy to share your memories.

Stephen Ferrell Hinton, 68, died peacefully at his home in Albany,...

Send flowers to the Hinton family.