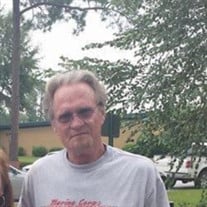 Stanley Boyd “Repete” McDonald, 70, of Albany, Georgia, entered into eternal rest peacefully at home, surrounded by his children and his brother Keith, on March 28, 2022. Born on August 25, 1951 at Turner Field in Albany, Georgia, he was the third of five sons born to Charles and Mildred. He was an Air Force brat that enlisted in the US Marine Corps at the age of 19 during the height of the Vietnam War. A true Patriot, he served and defended his country with extreme passion, and earned a Purple Heart the day before the peace treaty was signed that ended the war. After his service to the US, he created the patient transport department at Presbyterian Hospital in Oklahoma City, Oklahoma. He served as a security officer there, as well as in several other capacities for many years. He was a first responder to the bombing of the Alfred P. Murrah Federal Building in Oklahoma City, where he aided in the search and recovery of the many wounded and lost that day. A talented musician, he enjoyed playing in bands and jamming with his brothers and friends. After retirement he enjoyed spending time with his children and grandchildren. He returned to Albany when his health began to decline and was lovingly cared for by his brother Keith until he drew his last breath. He was preceded in death by his grandparents, his parents Charles (Millie) McDonald and Mildred (Tom) Bentley, his brothers Albert and Stephen “Pete” McDonald, and stepbrothers Larry and Billy Bentley. He is survived by the mother of his children, Margie, his children Hailey (Chris) Gutel, Lacee (Albert) Harrison, Madison (Maddie) McDonald, and Marlie McDonald (Daniel Miley). He was blessed with ten grandchildren Caleb (Madison), Evan, and Tyler (Grace) Gutel, Daxton (Paige), Gavin, Corbin, and Dehlia Harrison, Everly, Brooklyn, and Mason McDonald, and four great grandchildren Felix Harrison, and Ryland, Adler, and Banks Gutel. He is also survived by two brothers, Jerry (Claudia) and Keith McDonald, and stepsister Roberta Bentley. His extended family is boundless with a host of cousins, nieces, nephews, friends, and USMC brothers. The family would like to thank Agape Care Hospice for the gentle care they provided. “Semper Fidelis; For I was, am, and shall forever be a United States Marine! Oorah!”

The family of Stanley Boyd "Repete" McDonald created this Life Tributes page to make it easy to share your memories.

Send flowers to the McDonald family.