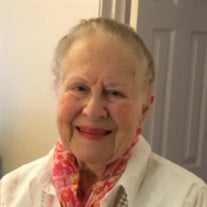 Sarah “Sally” McKay Hairston, 92, of Albany, died Sunday, September 13, 2020 at Phoenix of Albany. Funeral services will be held Saturday, September 19, 2020 at 11:00 AM at Covenant Presbyterian Church. Visitation will be held Friday, September 18, 2020 from 6:00 PM until 8:00 PM at Kimbrell-Stern. Dr. Biff Coker and Dr. Paul Luthman will officiate. Interment to follow at Crown Hill Cemetery. Due to Covid 19, restrictions and personal safety, we asks that those attending, wear your protective masks and use 6 feet social distancing. Sarah McKay Hairston, or Sally, as everyone knew her, was born Sarah Watkins McKay was born to John James and Josephine Banks McKay in Macon, Georgia on July 3, 1928. She was raised in Macon with her older sister, Josephine Banks McKay and attended school there. Upon graduation, she enrolled in Mercer University and became a member of Phi Mu Sorority. During her time at Mercer, she served as president of the sorority and met a young man from north Georgia named Charles Madison Hairston. After graduating from Mercer in 1950 with an A.B. (BA) in education, she and Charles (Charlie) continued their courtship and were married at the First Presbyterian Church in Macon on August 16, 1951. Soon after marriage, Sally and Charlie relocated to Albany Georgia where he began his career in mortgage banking while Sally started teaching at Northside Elementary School. She worked as a teacher in the Dougherty County School System for 19 years and then pioneered the Dougherty County School Volunteer Program and served as its director until her retirement in 1995. She also served as director of the Partners in Excellence program in the 1980’s, assisting 31 schools in the Albany area. Charlie and Sally also raised three children after moving to Albany. Sara Banks was born on May 25, 1956, Charles Madison, Jr. was born on September 3, 1961 and Caree Watkins was born on February 22, 1964. These three children have a total of six children and now the clan includes six grandchildren. Sally was very active in her church, Covenant Presbyterian Church, throughout her adult life. She served in numerous capacities over the years, from Sunday School teacher, to president of the Women of the Church Organization, to Deacon, to Elder, to Synod Commissioner. There never was a time when she wasn’t serving in some capacity at the church until her retirement in mid-nineties. After that time, she still remained an active member and supporter of the church and its mission. Sally was also active in the Albany community through many organizations. She was a member of the Junior League and served as vice president and secretary. She helped organize the Albany Symphony Guild and served as president. She was member of the Albany Area Museum (now Heritage Foundation) and served as president. For Liberty House, she served as member, board member and secretary. She was also a member of the Albany Community Concert board, and program chairwomen for the Dougherty County Home Builders Auxiliary. Sally was also involved in the activities of her children by being a Cub Scout den mother and a Junior Girl Scout leader. She was also a Kiwanis Wives member, and a neighborhood chairwoman for the American Cancer Society. She served as secretary for the Daughters of the American Revolution. She was also a member of the Children of the American Revolution and the Colonial Dames of America. Sally was a spirited person, promoting her community, the arts, educations, and her church. As you can see, she was also a dedicated and energetic leader. Sally was, however, most passionate about her children and grandchildren. The family trips to far-flung destinations, the Sunday and birthday dinners, the conversations and encouragement, celebrations at Thanksgiving, Christmas and New year’s Day, so many football games, and let’s not forget all the many times of eating at El Vaqueros enjoying the chips ‘n salsa and margaritas. Sally McKay Hairston will reverberate in our memories for the rest of our lives. Well done, good and faithful servant. One can only imagine that the endless search for the perfect seafood restaurant is over. We can envision seeing Sally and Charlie together again, enjoying the most heavenly gulf grouper with a side of oysters and their favorite beverages. Then jumping into the white convertible and moving on to the next adventure. Beautiful! Survivors include 2 daughters, Sally Hairston Malphrus (Buck) and Caree Hairston Elder (Michael) all of Lee County, a son, Charlie (Madison) Hairston, Jr., (Cathleen) of Kennesaw, GA, 6 grandchildren, Cameron Malphrus (Krissy Letlow), James Christopher Malphrus, Sara Cathryn Baggett, Lauren Mathis, Ragan Elder, Michael Kyle Hairston, 3 great grandchildren, Cameron Malphrus, Jr, Rueben Baggett, and Henry Bradford Rakel, 2 nephews, William Lowe Sheftall and John McKay Sheftall. Sally was preceded in death by her husband, Charles Madison Hairston, Sr. Memorials may be made to the American Cancer Society, 233 12th St., #710, Columbus, GA 31901, Alzheimer’s Association, Georgia Chapter, 1925 Century BLVD, NE, Suite 10, Atlanta, GA 30345-3315 or Covenant Presbyterian Church, 2126 E. Edgewater Dr., Albany, GA 31707. To share your thoughts with the Hairston family, you may visit our website at www.kimbrellstern.com.

The family of Mrs. Sarah "Sally" McKay Hairston created this Life Tributes page to make it easy to share your memories.

Send flowers to the Hairston family.