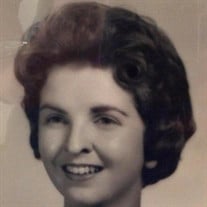 Mrs. Sarah Anne Chastain of Albany went to be with her Lord on Sunday, September 13, 2020. A celebration of her life will be held at Porterfield Memorial United Methodist Church on Thursday, June 24, 2021 at 11:00 AM. The Rev. Josh Duckworth and the Rev. Jennifer Sherling will officiate. The family will receive friends in the parlor at Porterfield prior to the service begining at 10:00 AM. Born on August 19, 1938 in Waycross, Georgia, she was the daughter of the late DeWitt Meredith Strickland (Buck) and Hazel Tyson Strickland. Sarah Anne attended Waycross schools and finished her formal education at Georgia Teachers College (Georgia Southern University) earning a Bachelors of Arts in Education (BAE) degree with an emphasis on teaching. She moved to Douglasville, Ga to begin her teaching career. During her senior year in college she met a young medical school student named George M. Chastain. They dated and then married on June 24, 1961. Following medical school graduation, George joined the U.S. Air Force and they were assigned to Eglin AFB in Ft. Walton Beach, Florida. George’s last year in the Air Force was spent in Vietnam during which time Sarah Anne and two children moved to Atlanta to be with her sister Meredith. After George’s discharge from the Air Force, they stayed in Atlanta and Emory University of Medicine for two years while her husband taught and practiced anesthesiology. In the fall of 1972, they moved the family to Albany where they remained until her death. Early in their marriage, Sarah Anne made a conscious decision to become a full-time mother to raise her children. During this time, she was actively involved in her community and her church. She was a hospital volunteer, permanent member of the Charity League, Bereavement Committee at Porterfield Memorial United Methodist Church, Suburban Women’s Club, Member and President of the Dougherty County Auxiliary. Along with her husband, she designed a program entitled “Seasons of Survival; The Road Following Cancer” that was presented during cancer campaigns. Sarah Anne was a gifted piano player and an avid bridge player. What she enjoyed the most was family outings in a conversion van to different places in the southeast. She had many friends, but her soulmate was her sister Meredith. They raised their children together, traveled together, shopped together and talked on the phone daily. They were inseparable as well as all five of the children – it often felt like one family. Living without her will be difficult, but tempered by the knowledge that she is whole, pain free and surrounded by everlasting love. Her desire was the family continue the traditions of being together which we will do in her honor and memory. Those who will carry on without Sarah Anne are her husband, George M. Chastain, MD; her three children George M. Chastain, IV (Lauri) of Virginia Beach VA, Sarah Beth Morgan (Ken) of Tullahoma TN, and Scott M. Chastain (Stephenie) of Holly Springs NC; her sister Meredith Daffin Jones (Charles) of Auburn AL; nephews Paul Daffin Jr (Beth) of Atlanta GA, Tyson Daffin (Heather) of Opelika AL and three grandchildren, Will Morgan, Abby Morgan and Davis Chastain. In lieu of flowers, contributions may be made to Porterfield Memorial United Methodist Church, Columbarium Fund at 2200 Dawson Rd. Albany, Ga 31707.

Mrs. Sarah Anne Chastain of Albany went to be with her Lord on Sunday, September 13, 2020. A celebration of her life will be held at Porterfield Memorial United Methodist Church on Thursday, June 24, 2021 at 11:00 AM. The Rev. Josh... View Obituary & Service Information

The family of Sarah Anne Chastain created this Life Tributes page to make it easy to share your memories.

Mrs. Sarah Anne Chastain of Albany went to be with her Lord on...

Send flowers to the Chastain family.