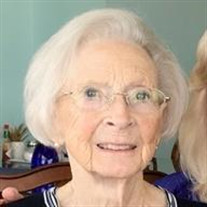 Ruth Dean Ford Pierce of Fernandina Beach, Florida passed away peacefully on Tuesday, July 9, 2019 at Community Hospice. She was born at home in Worth County, Georgia on July 12, 1929 and was the eldest daughter of the late Clement Anslem Evans Ford and Mary Agnes Rouse. She missed celebrating her 90th birthday by only 3 days. The majority of her life was spent as a wonderful homemaker, wife, mother and grandmother. The epitome of a Southern Lady, she was known for her grace, her gardens and her ability to entertain family and friends as her husband, the late James L Pierce, built his CPA practice in Albany, Georgia. An amazing cook and passionate advocate for healthy eating and exercise, she was truly an inspirational trailblazer. She was a member of First Methodist Church and active in Thronateeska NSDAR and The Charity League. In 1981, the Pierces moved from Albany to Fort Worth, Texas to welcome the birth of their first grandchild, Melissa and two years later, James. In 1987, they retired to Bribie Island, approximately an hour north of Brisbane in Australia, where, as she said, they enjoyed a 10-year vacation! After returning to the States in the late 90’s, they briefly lived in St. Augustine, FL but relocated in 2002 to Boulder, Colorado to be near daughter Tina and family. After her husband died, she lived with Tina in the San Francisco Bay area and finally in Fernandina Beach. She first visited Fernandina in 1952 to meet the family as a new bride and fondly recalled that Sadler Rd was paved with oyster shells! She is survived by her daughter, Tina (Gary Patterson); granddaughter, Melissa Wilson (Mike Shull) and grandson, James Wilson; sister-in-law, Barbara Pierce; brother-in-law, Wendell Bowen and many nieces, nephews and their families. She is preceded in death by her husband, James L Pierce; her mother-in-law, Ethyl Herring Pierce, a longtime Fernandina resident; her twin sisters, Dorothy Bowen and Doris Page; her brothers-in-law, Malcolm Pierce and Gene Page. Graveside services will be held at 10 am in Parrott, Georgia on Monday, July 22, 2019. In lieu of flowers, the family requests that a donation to Community Hospice of Northeast Florida (www.communityhospice.com)be made in her name. She was an extraordinary mother and grandmother whose smiles and laughter will be missed by the many who loved her.

Ruth Dean Ford Pierce of Fernandina Beach, Florida passed away peacefully on Tuesday, July 9, 2019 at Community Hospice. She was born at home in Worth County, Georgia on July 12, 1929 and was the eldest daughter of the late Clement Anslem Evans... View Obituary & Service Information

The family of Ruth Dean Ford Pierce created this Life Tributes page to make it easy to share your memories.

Send flowers to the Pierce family.