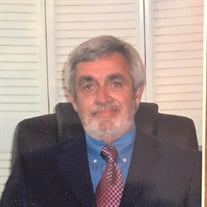 Eddie left this earth suddenly and unexpectedly on Monday, March 22, 2021. He left just as he came into this life, as a man of character with a positive outlook always. He was admired, respected, and loved beyond measure by his family, friends, and co-workers. A graveside funeral service will be held Thursday 2:00PM at Riverside Cemetery. Rev. Charlie Rouse will be officiating. Attendees are requested to wear facemask and social distancing. After leaving the Navy with an honorable discharge, he never stopped. His after-service career began in Albany, Georgia at Ga. Power Plant Mitchell as a procedure writer and Ga. Power Dam operator, a job that he dearly loved. It was there that he met some of his dearest friends. After retiring from Ga. Power, Eddie and Lisa moved to Chelan, Washington to pursue a career with the Army Corp of Engineers at the St. Joseph Dam. He loved his job there, working dams! To be closer to family, Eddie and Lisa returned to Albany to begin yet another career with the Marine Corp Logistics Base (MCLB) as an energy manager. As MCLB Albany’s Energy Manager, Eddie was instrumental in the base winning five Secretary of the Navy Awards as the top small base in the Marine Corp. He also played a key role in MCLBA becoming the first Net Zero base in the Dept. of the Navy, producing their entire electrical requirements from green energy. This accomplishment included partnering with P&G, Ga. Power, and Constellation New Energy. It also included partnering with Dougherty County to purchase land fill gas that operates a generator on base. According to his supervisor, H.W. “Ski” Smigelski, “his dedication and commitment to MCLB Albany’s energy program will be greatly missed”. In his multiple careers, he never considered slacking off or giving up on any project. Till the day he died, he always strived to learn more to do the best job he could. Anyone who knew Eddie, knew that he was always & forever a true Atlanta Falcons and Georgia Bulldogs Fan! He loved golf and especially having that time with his longtime friends, which he cherished. Those were some of his best days. Eddie was a kind and gentle soul, who was always decent in this, sometimes, cruel world. If you were his friend, he loved you, if you were his employee, he would strive to help you, and if you were lucky enough to be his family then you were loved and supported with all he had to give. Eddie “Squeeze” Hunt is survived by his loving wife and best friend of 36 years, Lisa Hunt; Sister-in-laws: Jacque Barfield Yeoman and Sandy Barfield Holland; Stepsister and her husband, Penny and Jay Roper; Nephew Chris Holland and many, many dear friends, cousins, and respected colleagues. The family asks that in lieu of flowers, donations be made to any animal charity of your choice.

Eddie left this earth suddenly and unexpectedly on Monday, March 22, 2021. He left just as he came into this life, as a man of character with a positive outlook always. He was admired, respected, and loved beyond measure by his family, friends,... View Obituary & Service Information

The family of Mr. Royce E. "Eddie" Hunt Jr. created this Life Tributes page to make it easy to share your memories.

Eddie left this earth suddenly and unexpectedly on Monday, March...

Send flowers to the Hunt family.