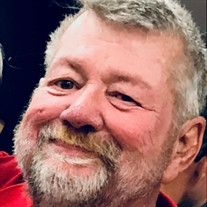 Ronald Lee (Ronnie) Snow, 67, of Dougherty County passed away peacefully at his home due to natural causes Sunday, April 26. A private funeral service will be held for the family. Pastor Dan Story will officiate. Due to restrictions relative to COVID-19, a celebration of his life by family and friends will be held at a later date. Ronnie was born In Quitman, Georgia to the late Louise M. Snow and Robert L. Snow. Over the years Ronnie was an avid deer hunter. He enjoyed going to the hunting land with his daughters and hunting club friends. Family trips to the lake and family vacations gave him much joy and happiness. He and faithful companion, Buddy, were often found driving around the lake and Albany visiting friends. He was a kind and loving person who valued his family above all else. He was a man of faith and a Christian. He had a passion for college football and was a loyal fan of the Georgia Bulldogs. In 1973 he moved to Albany and began working at Albany Engine Rebuilders. In 1976 he became Parts Manager for Agri-Con Tractor, Inc. where he continued to work until the business closed. After finding out that retirement was not for him, he began working part-time as a Facilities Supervisor at Darton State College and then Albany State University. He retired once again in May, 2019. Ronnie is survived by his wife of 47 years and the love of his life, Martha Medders Snow, his daughters Lindsay Snow (Staci), Leesburg, Heather Harbuck (Michael) and his two, precious grandsons Jackson Medders Harbuck and Finley Miles Harbuck of Leesburg, his sisters Alachia Snow and Betty Wiggins (Bill) from Quitman, a sister in law, Linda Baxter (Bob), nieces and nephews and his mother-in-law, Peggy Medders, Albany. He was also preceded in death by his father-in-law, Tommy L. Medders who was like a father to him.

Ronald Lee (Ronnie) Snow, 67, of Dougherty County passed away peacefully at his home due to natural causes Sunday, April 26. A private funeral service will be held for the family. Pastor Dan Story will officiate. Due to restrictions relative... View Obituary & Service Information

The family of Mr. Ronald Lee Snow created this Life Tributes page to make it easy to share your memories.

Send flowers to the Snow family.