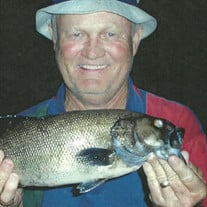 Ronnie R. "Kat" Paul, 81, of Nashville, Tennessee, died December 9, 2019 at Heartland Senior Community. Funeral services will be held Friday at 11 AM at Kimbrel Stern Funeral Home. Rev. Ken Chancellor will officiate. Interment will follow in Crown Hill Cemetery. Ronnie was a native of Morgan, Georgia born to the late J.D. and Maydie Paul. He grew up in Shellman, Georgia and graduated from Shellman High School where he was a member of the 1956 Wildcat Class C State Baseball Championship Team. Ronnie was a member of the US Army Reserve from January 1961-November 1966 and was on full time active duty from 61-62. He was an audio-visual technician with, and retired from Southwest Georgia Regional Educational Service Agency. He was a Charter member of Lakeside Baptist Church. Ronnie moved to Nashville, Tennessee in 2014 and was a member of the First Baptist Church of Donelson. Ronnie loved fishing, hunting, and watching the Atlanta Braves and the Georgia Bulldogs. He was preceded in death by three siblings, Vaughn Paul, Nadine Edwards, and Haywood “Buddy” Paul. Survivors include his wife, Rhonda Paul of Nashville, Tennessee, his children, Kimberly (Reed) Barwick of Leesburg, Georgia; Kelli (Jackie) Duke of Leary, Georgia; Heather (Mark) Littlefield of Nashville, Tennessee; Stephanie Paul of Nashville, Tennessee; his sister, Phyllis Stamps of Atlanta, Georgia and his grandchildren, Kendall Joiner, Cameron Davis, Rooks Duke, Makinley Duke, Owen Littlefield, and Blake Littlefield. The family will receive friends Friday from 10:00 AM until 11:00 AM at Kimbrel Stern.

The family of Mr. Ronald Rudolph Paul created this Life Tributes page to make it easy to share your memories.

Send flowers to the Paul family.