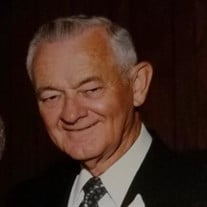 Robert William Tosh, 90, of Albany, died Sunday, September 27, 2020 at his residence. Funeral services will be held Wednesday, September 30, 2020 at 3:00 PM at First Baptist of Albany. Visitation will start prior to the service from 1:30 PM until funeral hour at the church. Interment will follow at Crown Hill Cemetery. Dr. William “Butch” Knight will officiate. Known as Papa for the last 35 years by his grandchildren and all his family, last 15 years one particular grand-daughter only called him “Bob”. Papa/ Bob was renamed “Old Papa” in 2008 when the first great-grandchild arrived and he loved every moment of life with his wife of 68 years and family. He touched many a young man’s heart on a baseball diamond as he was a dedicated coach and mentor too so many even before he had his own son to coach. When it was thought he was teaching baseball, years later they learned he was teaching them life lessons that all still carrier with them today. Involved in every activity his children were every involved in and that dedication continued with each grandchild and great-grandchild, he never missed an event, game or school function or any other important day. Mr. Tosh, retired in 1994 from owning his own business and then begin a long career with the Department of Natural Resources here in Albany until his illness. He loved the outdoors, fishing, bird hunting, vacations in the mountains or the beach, any place was fine as long as his family was along for the ride. Papa loved the Atlanta Braves and Georgia Bulldogs, The Riverview Vikings, Lee County Trojans & Terrell Academy Eagles. Dedicated to his church family and never met a stranger. Worked hard, played hard and gave his all in anything he was doing but most especially in his walk with Jesus. Survivors include his wife Betty Cain Tosh of Albany, a daughter, Debra “Debbie Lawton (Andy) of Lee County, a son, Bobby Tosh (Melissa) of Albany, 2 brothers, David Tosh and Carl Tosh (Ethel), 2 sisters, Alice Jones and Lois Vanduzer, 2 sisters in law, Rosalie Tosh and Joan Tosh, 3 grandchildren, Matt Lawton (Brittany) of Leesburg, Kayla Henthorn (Lee) of Terrell County, and Reaghan Tosh of Albany, 3 great grandchildren, Luke Lawton of Lee County, Cross Lawton of Lee County and Wyatt Henthorn of Terrell County. Memorials may be made to First Baptist of Albany, 145 Oakland Pkwy, Leesburg, GA 31763, or to Albany Community Hospice, 320 Foundation Lane, Albany, GA 31721. To share your thoughts with the Tosh family, you may visit our website at www.kimbrellstern.com.

Robert William Tosh, 90, of Albany, died Sunday, September 27, 2020 at his residence. Funeral services will be held Wednesday, September 30, 2020 at 3:00 PM at First Baptist of Albany. Visitation will start prior to the service from 1:30 PM... View Obituary & Service Information

The family of Mr. Robert William Tosh created this Life Tributes page to make it easy to share your memories.

Send flowers to the Tosh family.