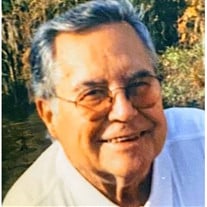 Born November 13, 1929 to Ruth Dixon Ellington and Lewis Duval Ellington in Blackshear, Georgia. He excelled at academics and sports, especially basketball, and graduated from Blackshear High School. He joined the Air Force and was stationed in Japan. He served for several years, always patriotic saying that the Air Force did far more for him than he ever did for the Air Force. Following military service, he moved to Atlanta to attend Southern College of Pharmacy. He excelled at chemistry and held the office of President of his collegiate Pharmacy Honor Society. He met his beautiful wife of 64 years, Betty Lynn Barrow, in Atlanta when she walked in to her neighborhood pharmacy. She was introduced to the handsome young intern, and they were married in Atlanta in March of 1957. They moved to Albany, Georgia for him to begin work with Albany Drug Company. He was a loving and dedicated father to children Frederick, Angela, and Robert. They took many memorable vacations as a family. He had a sense of adventure and a natural interest in exploring new places - camping , amusement parks, and historical sites. He was proud to have visited every state in the USA. He was a devoted husband; he and wife Betty loved traveling and had some memorable trips. He was a conscientious, hardworking business owner. He owned Plaza Pharmacy and Northside Pharmacy in Albany, Georgia, and many years later Thrift Center Pharmacy in Camilla, Georgia. He provided the best service for his customers, and it was common to get calls nights and weekends to fill an emergency prescription. At the end of his pharmacy career, he worked for several years at the Lee County Correctional Institute as a Pharmacist. In addition to his family, his other true love was the game of golf that he played 3 times per week at Radium Country Club. He was known to bust overhead lights in the living room in his attempt to perfect his swing. Later in life, when unable to play the game, he loved to watch the Golf Channel and every televised tournament. He especially loved to discuss the game with his grandsons, who also love the game. He will be missed by his family and friends who will treasure wonderful memories. A man of deep faith, he was a member of Porterfield United Methodist and the Key Sunday School Class. He is preceded in death by parents Lewis Duval Ellington and Ruth Dixon Ellington, as well as granddaughter, Leah Ellington Pope. He is survived by his wife of sixty-four years, Betty Lynn. Son Frederick and wife Marcia of Marietta, Georgia, daughter Angela Pope and husband Mark of Dacula, Georgia, and son Robert and wife Sala of Leesburg, Georgia. Brother Larry Ellington and wife Pat, St. Simons Island. Grandchildren James Ellington, Marissa Ellington Womack (Jarrod), Reese Pope, Dixon Pope (Haley) Laine Ellington, Kate Ellington, and John-Robert Ellington. Great Grandchildren Miles Womack, Maple Womack, Olivia Pope, Mills Pope, and Shepherd Pope. Niece Pam Ellington Brown (Andy) and nephew Stephen Ellington (Beth). The family would like to thank the staff of Willson Hospice House for the incredible care they provided. In lieu of flowers donations may be made to Willson Hospice House or Porterfield United Methodist in his memory. Funeral service will be Wednesday, August 25, 2021 with visitation at 2 pm, memorial service 3pm. Porterfield United Methodist, 2200 Dawson Road , Albany, Georgia 31707.

Born November 13, 1929 to Ruth Dixon Ellington and Lewis Duval Ellington in Blackshear, Georgia. He excelled at academics and sports, especially basketball, and graduated from Blackshear High School. He joined the Air Force and was stationed... View Obituary & Service Information

The family of Robert Duval Ellington created this Life Tributes page to make it easy to share your memories.

Send flowers to the Ellington family.