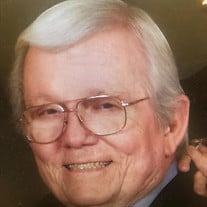 Dr. Paul Melvyn Murphy, 89, of Albany, GA died October 24, 2020 at Navicent Medical Center in Macon, GA. Born in Edison, GA, Melvyn was the son of the late Paul F. Murphy and Mildred M. Murphy and the brother of the late Morgan G. Murphy. Melvyn grew up in Albany, GA and graduated from Albany High School in 1949. He attended South Georgia College in Douglas, GA before joining the U.S. Navy during the Korean War. After four years of service, he attended Auburn University where he met the love of his life, Mizelle Pritchard. In 1957, he and Mizelle married and moved to Atlanta, GA where attended Emory University School of Dentistry. After graduation, Melvyn and Mizelle returned to Albany where he practiced Dentistry for forty-five years before retiring. Dr. Murphy served his profession well and in ways beyond being a practitioner: he was a member of the American Dental Association, past president of Southwest Georgia Dental Association, and an Honorable Follow of both the Georgian Dental Association and American College of Dentists. Dr. Murphy dedicated his leadership and commitment to his community, as he served on the board of directors and as past president of the Y.M.C.A. and as past President of the Albany Rotary Club, where he was also recognized as a Paul Harris Fellow. Dr. Murphy was also a charter member of Doublegate Country Club and served as past President. He was also dedicated to coaching and shaping young boy’s lives, as he coached numerous Y.M.C.A. Basketball and Dixie League Baseball teams throughout the children’s early years. Dr. Murphy is precede in death by his wife, Mizelle Pritchard Murphy. He is survived by his three children, Michael P. Murphy (Lisa) of Gulf Breeze, FL, Rhonda Murphy Fox (Kenny) of Baconton, and Dr. Stephen A. Murphy (Devi) of New Orleans, LA. He is survived by five grandchildren, Garrett Fox, Katie Fox, Drew Murphy, Luc Murphy and Mila Murphy. He was a loving husband, father, papa, and friend and will be greatly missed by all. Due to the current COVID-19 pandemic and specific risk it poses with gatherings, the family will not be receiving friends. We certainly wish circumstances would allow us to visit and celebrate his life together with friends and extended family. Please know we are grateful for the continued outpouring of love and support, heartfelt thoughts, prayers, and outreach from all friends and family. A private graveside ceremony will be held with his immediate family only. In lieu of flowers, memorials may be made to Porterfield United Methodist Church.

The family of Dr. Paul Melvyn Murphy created this Life Tributes page to make it easy to share your memories.

Send flowers to the Murphy family.