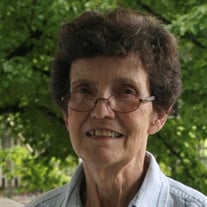 Patricia Blair Yost, 81, died Tuesday, October 15, 2019 at her residence. Funeral services will be held Thursday, October 24, 2019 at 1:00 PM at Dawson United Methodist Church. Visitation will be held Wednesday, October 23, from 7:00 PM until 9:00 PM at Kimbrell-Stern. Rev. Allen Carmichael will officiate with interment to follow at Crown Hill Cemetery. Mrs. Yost was a wife and mother of 6 children who spent the majority of her adult life as a church music director. She served in several churches in the Albany area and surrounding counties. Music gave her great joy. She sang with the Jubalheirs and the Albany Chorale and was cast in several musicals at the Albany Little Theatre. After moving to Dawson she became active in the community as a volunteer at the Terrell County Library, the Terrell County History Museum and the Terrell County Voter Registration. Survivors include her children, Margaret Beck and her husband, Gene of Camilla, GA, David Keller and his wife, Wanda of Opelika, AL, Joseph Yost, Jr., and his wife, Chris of Conway, Arkansas, Robert Yost and his wife, Lynn of Valdosta, GA, Joe Keller and his wife, Debbie of Castroville, TX, Marjorie Delaney and her husband, Roger of Dawson, GA, a sister, Jean Sage, a brother, Donald Blair, 12 grandchildren and numerous great grandchildren. Mrs. Yost was preceded in death by her husband, Joseph Yost, Sr., and 2 brothers, David Blair and John Blair. To share your thoughts with the Yost family, you may visit our website at www.kimbrellstern.com.

The family of Mrs. Patricia Blair Yost created this Life Tributes page to make it easy to share your memories.

Send flowers to the Yost family.