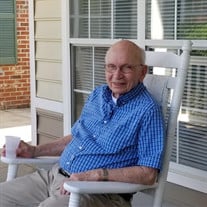 Phronus Lee (P.L.) Gore, also known affectionately as Brother or Buck, passed away Wednesday April 6, 2022 at the Phoenix of Albany. He was born on June 18, 1925 to Susie Mae Kidd Gore and Lee Roy Gore in Cotton, GA. A graveside funeral service will be held Saturday 11:00AM at Floral Memory Gardens. Rev. Jeff Carter and Frank Stimpson will be officiating. The family will be receiving friends following the service at the graveside and at the home. P.L. was educated in the Cotton and Pelham school systems before enlisting in the U.S. Army at the age of 17 during World War II. As a member of the 25th Infantry Division, 161st Regiment Anti-Tank Company, he participated in the Battle for Luzon in the Philippines, where he was in combat for 165 consecutive days. Following his decommission as a Transportation Sergeant in February 1946, P.L. returned to Mitchell County, GA. He married Betty Glenn Gore in 1947, and in 1948 they moved to Albany where he resided until his death. P.L. was employed as Service Manager at Albany-Lincoln Mercury and Pritchett Ford before beginning work as a Maintenance Supervisor at Bob’s Candy Company for 26 years. After retirement, P.L. returned to employment as a part time auto transport driver before devoting himself exclusively in 2000 to Finnicum Motor Company until the age of 92. Truly a member of the greatest generation, P.L. was born into humble beginnings, survived the struggles of the Great Depression and the horrors of combat in World War II. A man of many skills and talents, he displayed an extraordinary work ethic and was dedicated to completing a task to perfection. He was a wonderful husband, father, father-in-law, grandfather, great-grandfather, citizen and patriot. As a longtime member of Raleigh White Baptist Church, P.L. served his Sunday School class as Secretary-Treasurer and as a church usher. He remained faithful to his church until his deteriorating health made it difficult to attend. P.L. was predeceased by his parents, his wife of 59 years Betty, and his sisters Virginia Palmer and Nadine Faircloth. He is survived by his daughters, Beverly Hysler (Larry), Gloria Holton (Bobby) and Nancy Gore; his grandchildren Kevin Hysler (Shelly), Ashley Holton (Joslyn) and Ana Holton and four great-grandchildren, Lathan Hysler, Gracie Hysler, Harper Holton and Cole Holton. In lieu of flowers, donations may be made to Samaritan’s Purse or to your favorite charity.

The family of Mr. P. L. Gore created this Life Tributes page to make it easy to share your memories.

Send flowers to the Gore family.