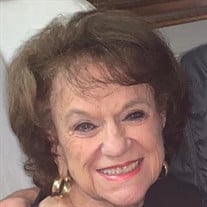 Nona Morgan Persall, 92, passed away peacefully at her home in Albany, GA on Friday the 23rd of July. Born to Earnest Paul Morgan and Addie Mae Williamson Morgan, Nona grew up among wonderful siblings and later married Charles Henry Persall, DVM who died in 1994. Nona was pre-deceased by her son Chuck Persall, brothers Tommy Williamson & Johnny Morgan, and sisters Charlotte Batten & Valerie Houston. Nona is survived by her son Buddy Persall (Holli), and her daughters Pam Aiken (Tim) and Paula Woodall (Wright). Toni Azinger (Paul) niece, was another daughter in Nona’s mind. She is also survived by 7 grandchildren - Brent Persall (Catalina), Cindy Beebe (Adam), Alan Dismuke (Cherryl), Greer Aiken (Leah), Charlie Persall, Landon Woodall (Kathleen) and Matt Woodall (Morgan). She is also survived by great grandchildren, Holden and Ashton Persall- Dreyton, Payne, and Addy Kate Dollander- Ripp Dismuke- Walker and Bo Aiken- Isla and Fen Woodall- and Julian and Nico Castaño. To be around Nona was to feel as welcomed and as loved as it gets. You had to admire her for there was no reason not to. She had cooked many a great meal for her family and friends throughout the years, taught many a card game to grandchildren, played hostess to sewing clubs, garden clubs, the Jr Woman’s Club, the Charity League, church groups, birthday clubs and most recently to a special group called “The Mondays”. Known for her quick wit, she was the life of the party and could leave you in tears laughing about her famous quotes. Her wisdom was treasured in every conversation for she knew how to be a doctor if you were sick and a friend if you were down. Her main challenge came with technology and pushing the right button on her cell phone-- as many a person was disconnected by the phone that she claimed was too old and not working. There will be a Memorial Service at 2 PM Monday, July 26, 2021 at Porterfield Memorial United Methodist Church. The address is 2200 Dawson Rd, Albany, GA 31707

The family of Nona Morgan Persall created this Life Tributes page to make it easy to share your memories.

Nona Morgan Persall, 92, passed away peacefully at her home in...

Send flowers to the Persall family.