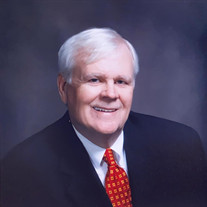 Needham Carey Hatcher Jr., 80, passed away peacefully at his home on Thursday, February 17, 2022. A visitation will be held Saturday, February 19th, from 11 AM-12 PM at Porterfield Memorial United Methodist Church. A private graveside service will be held at Crown Hill Cemetery. Carey was born in Albany on April 5, 1941 and was the son of the late Needham Carey Hatcher and Lorene Lemacks Hatcher. He was predeceased by the sister Carenne Hatcher Miller and is survived by Richard Percy Hatcher (Carol) of Watkinsville, GA and by Donna Hatcher Castleberry (Raymond) of Madison, GA. He was a member of the Class of 1959 of Albany High School and held a Bachelor of Science degree from Valdosta State University, Class of 1964. He began a career in the agricultural chemical business and farming industry after college and became a prominent figure in the ag chem business in Southwest Georgia. Carey was a member of Porterfield Church. His community interests included a long-term membership and support of the YMCA of Albany where he served multiple terms on the Board of Directors. He actively supported Deerfield Windsor School, with long stints directing the Booster’s Club and a lengthy term on the Board of Trustees where he served as Chairman of the Board in the early nineties. He cherished his friendships across the community but especially reserved his greatest joy for his family. His is survived by his wife of 58 years, the former Betty De Vane of Brooks County and Valdosta Their children are Shannon Stewart (Sam) of Blackshear, GA, Melissa Brennan (Bob) of Atlanta, GA, and Needham Carey III (Bo) and his wife Mandy Shackelford Hatcher. Carey was especially proud of his grandchildren, Sam G. Stewart Jr. and Caroline Stewart of Blackshear, Catherine, John and William Brennan of Atlanta and Jake and Joseph Hatcher of Albany. In lieu of flowers, the family requests that memorials be sent to the YMCA of Albany, 1701 Gillionville Rd., Albany, GA, 31707 or to the Porterfield Memorial United Methodist Church Food Ministry 2200 Dawson Road, Albany, GA, 31707.

The family of Needham Carey Hatcher, Jr. created this Life Tributes page to make it easy to share your memories.

Needham Carey Hatcher Jr., 80, passed away peacefully at his...