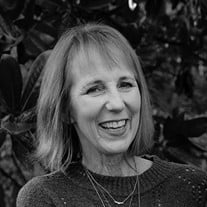 Nancy Coffey Mitchell, 66, of Roswell, GA passed away at her home early on the morning of Monday, August 17th, 2020 after battling cancer for several years. A private graveside service and interment will be held with family later this week at Crown Hill Cemetery in Albany, Ga. Nancy was born May 20, 1954 in Cuba, AL to Amy Coffey Spencer and Boyd Coffey as the fifth of nine children in the family. She graduated from Decatur High School in 1972 and went on to earn her B.S.N. degree from the University of Alabama in Huntsville in 1976 and her M.S.N. degree from the University of Alabama in Birmingham in 1979. She practiced as a nurse in the intensive care and critical care units from 1976-1978, then taught nursing at the University of Alabama (1979-1980), the University of Kentucky (1980-1983), and at Darton College School of Nursing (now Albany State University) in Albany, GA (2010 – 2016). She married Stephen Mitchell in 1980; they moved to Albany in 1987 and raised their four children there. She was very active as a member of Covenant Presbyterian Church and as a volunteer with her children’s schools, Young Life, Whiz Kids, and several annual cancer research fundraisers. In 2016, Nancy relocated to Roswell, GA to be closer to her family and became a member of Roswell Presbyterian Church. Nancy is remembered as a devoted mother, grandmother, and sister; a faithful Christian; a steadfast friend; and a helper of those in need. She enjoyed cooking for a crowd, sewing, running, gardening, and traveling. She was always ready for an adventure, a game, or a late night spent laughing and telling stories with those she loved. She will be dearly missed by all who knew her. She is preceded in death by her parents and by her son, Wyatt Mitchell. She is survived by her adoring children Sarah (Greg) Hook, Julia (Tom) Rittenhouse, and Brooks (Kaitlin) Mitchell, and grandsons Benjamin Hook, Henry Hook, Huck Rittenhouse, and Billy Rittenhouse. In addition, she is survived by siblings Debbie Langley, Jane Cason, Joan Morehead, Susan Riley, Carol Clark, John Coffey, Don Coffey, and Bobby Coffey and many loving brothers-in-law, sisters-in-law, nieces, and nephews. In lieu of flowers, it was Nancy’s desire that donations be made to the following non-profit organizations: Sarcoma Foundation of America (curesarcoma.org/donate) or Young Life (giving.younglife.org/s). To share your thoughts with the family, you may visit Nancy’s tribute wall at Kimbrell-Stern’s website (www.kimbrellstern.com).

Nancy Coffey Mitchell, 66, of Roswell, GA passed away at her home early on the morning of Monday, August 17th, 2020 after battling cancer for several years. A private graveside service and interment will be held with family later this week at... View Obituary & Service Information

The family of Mrs. Nancy C. Mitchell created this Life Tributes page to make it easy to share your memories.

Nancy Coffey Mitchell, 66, of Roswell, GA passed away at her...

Send flowers to the Mitchell family.