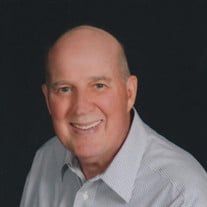 Myron Lee (Butch) Ellanson passed away from cancer on December 21, 2021. His memorial service will be held January 8, 2022 at 1:00 PM at First United Methodist Church, 307 Flint Ave., Albany, with the Rev. Anna Miller officiating. Visitation will be one hour prior to the service in the church sanctuary. A private interment service will follow at Crown Hill Cemetery. Butch was born in Mankato, MN on May 16, 1949 to Alvin and Marjorie Ellanson. He graduated in 1967 from Lake Crystal High School in Lake Crystal, MN and enlisted in the Navy. After enlisting in the Navy and completing training, he was assigned to Reconnaissance Attack (Heavy) Squadron One (RVAH-1) with home base at Naval Air Station Albany. He served on the USS Saratoga while on deployment to the Mediterranean from July 1969 to January 1970 and on the USS Ranger while on deployment to Vietnam from October 1970 to July 1971. He was retired from Technical Associates where he worked as a Mechanical Engineer designing projects for P&G. He is survived by his wife: Nancy Kaliher Ellanson; sons: Patrick Ellanson (Ann), Zachary Ellanson, and Garrett Ellanson; step- children: Jason Portt (Kailan) and Mary Ann Portt Kessenich (Peter). Surviving siblings are Ed (Judy) Ellanson, The Villages, FL, Beverly Ellanson, Boynton Beach, FL, Arleen (David) Nietz, White Bear Lake, MN, Robert (Laurie) Ellanson, Mankato, MN, and many nieces and nephews. He was preceded in death by his parents and siblings Delbert Ellanson, James Ellanson, also several in-laws: Dene Ellanson, Norma Ellanson, and a nephew Jason Nietz. Donations can be made to St. Judes Children Research Hospital, 501 St. Jude Place, Memphis, TN 38105, or First United Methodist Church, 307 Flint Ave., Albany, GA 31701.

The family of Myron Lee "Butch" Ellanson created this Life Tributes page to make it easy to share your memories.

Myron Lee (Butch) Ellanson passed away from cancer on December...

Send flowers to the Ellanson family.