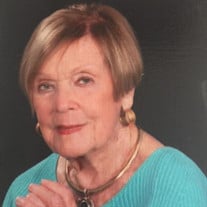 Mildred Elizabeth Macleod Turner, “Millie”, died on May 6 in Columbia SC after a recurring illness. She was 94 years old and is survived by son Lawrence Turner (Gail), daughter Betts Sorsby (Dayton); grandsons Casey Turner (Lindy), Will Turner (Bailey), and Turner Sorsby; grand daughters Angel Reed (Dan) and Jordan Walker (Jarrod); 5 great grandsons, 2 great granddaughters, nieces, nephews and friends. Millie is predeceased by her husband, Bill Turner, sons Billy Turner and David Turner, grandson Guy Turner as well as her parents Norman and Irma Hicks Macleod, brother Richard Macleod, and sister and brother in law Grace and Jerry Nelms. Mrs. Turner was born in San Antonio on March 25, 1927 and graduated from San Jacinto High in Houston. In 1948, she graduated from Georgia State College for Women in Milledgeville with a major in Spanish and a minor in sociology, and married Bill the next day! They eventually made it back to Albany, where he was from. She and Bill raised their four children in Albany and lived there many years before relocating to Florida, and finally to South Carolina. Millie and Bill were faithful charter members of Porterfield Methodist Church, where Millie enjoyed singing in the choir and participating in women’s groups. She was also a member of the Woman’s Club of Albany, Charity League, Suburban Woman’s Club, serving as president of the Charity League (1977) and Suburban Woman’s Club (1994). Millie was a fun loving, social woman who enjoyed her family and friends; golf, tennis and bridge groups, travel, needlework, sports, and rooting for Clemson football, where Bill graduated. We love you, Mom, Mother, Nana, Millie and wish you Godspeed….Rest in Peace. A memorial service will be held on Saturday, June 19th at 10:30 a.m. in the Mabel Haley Chapel of Porterfield UMC. Those desiring, please make memorials to Porterfield United Methodist Church.

The family of Mrs. Mildred "Millie" Elizabeth Macleod Turner created this Life Tributes page to make it easy to share your memories.

Mildred Elizabeth Macleod Turner, “Millie”, died on May 6 in...