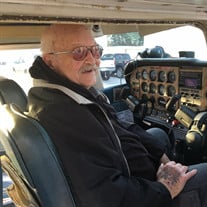 KEY, Max Leroy age 81 of Carrollton, Ga. passed peacefully September 4th, 2019. He was born in Alma, Ga., December 13,1937 and grew up in Pavo, Ga. Max graduated from Southern Technical Institute near Atlanta and was employed as an Electrical Engineer most of his career and held various positions at Firestone, Albany Ga., Walt Disney World, and Bechtel Engineering in Orlando FL., and Proctor & Gamble in Georgia. He loved every aspect of his career as an Engineer and was responsible for numerous positions including assisting in the development and design of the Peoples Wedway Transit system at Walt Disney World, traveling to Japan with the design and construction team of Euro World, and overseeing a new runway lighting project for the Orlando International Airport. His personal interests included almost anything with an engine, aircraft in particular. His dream was to build his own airplane and fly it around the country. He also loved to fish off shore, work on anything under the sun, or just relax while reading a book and enjoying a cigar. He will be deeply missed by his children, son Jeffrey Scott Key and wife Anita, daughter Sabrina Bedford and husband Nathan. Grandchildren, Cameron and Skyler Key, Brian Earwood, Andrew Dickens, Wendi Owens, Nicole Williams, and Alex Williams. Great grandchildren: Lisa Bedford, Ariel and Keira Dickens, Dakotah, Masen and Peyton Earwood and their families. Max is preceded in death by his daughter Lisa Marie Key Earwood, parents Marvin & Blanche Key and brother James Key. He will be interred at the Key family plot at Crown Hill Cemetery in Albany Ga. A graveside memorial service will be held Saturday, September 14th, at 11AM.

KEY, Max Leroy age 81 of Carrollton, Ga. passed peacefully September 4th, 2019. He was born in Alma, Ga., December 13,1937 and grew up in Pavo, Ga. Max graduated from Southern Technical Institute near Atlanta and was employed as an Electrical... View Obituary & Service Information

The family of Mr. Max Leroy Key created this Life Tributes page to make it easy to share your memories.

Send flowers to the Key family.