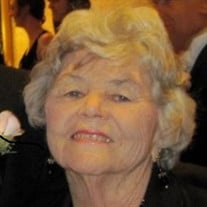 Mary Mays Alford Faulk, 88, passed away Tuesday, November 27, 2019 in Augusta, Georgia at the home of her daughter, Laurie Montgomery. The only child of Green Floyd Alford, Jr. and Mary Crawford Mays, she was born in Albany on December 12, 1930. As a child Mary grew up in Albany and in resort hotels operated by her father. He managed Radium Springs when it was first developed, and they lived in “Pear” cottage until Mary was nine years old. Winter seasons were spent in Florida at the Hotel Charlotte Harbor in Punta Gorda, as well as Bocca Grande and Useppa Island. Summers were spent in the north at hotels in Belgrade Lake and Wiscasset, Maine, Spring Lake, New Jersey, and Harbor Springs, Michigan. Between winter and summer seasons, the Alfords lived in Albany with Mary’s maternal grandmother, Madelle Burrows Mays, at 920 Broad Street. School years were split between Albany and Florida until 10th grade, when she attended Saint Anne’s School in Charlottesville, Virginia. After graduating from Saint Anne’s, she attended Pine Manor Junior College in Wellesley, Massachusetts, graduating in 1951. In September 1951 she married Frank Faulk, Jr. in Harbor Springs, Michigan, and they returned to Albany, where he practiced law. She embraced community organizations such as the Junior Woman’s Club, the Junior League of Albany of which she served a term as President, the Town and Country Garden Club, three bridge clubs, and a gin rummy group. She was a devoted member of Saint Paul’s Episcopal Church, chairing the church bazaar, and serving on the altar guild for over 50 years. Holidays were often spent with her children at her parents’ hotel, the Lido Biltmore Club in Sarasota, Florida. She was an avid Atlanta Braves fan, as well as following tennis and golf. She was also famous for her delicious cheese straws and the Christmas stockings she knitted. In later years she enjoyed “the Mondays,” a social group of long-time Albanians that meet together once each week. Mary often worked, including for Albany Housefurnishing Company, the family business, and as a substitute teacher, a real estate agent, and delivering newspapers. She also worked as a poll manager for the Dougherty County Board of Elections for many years. In recent years, she worked for Drapery Design, Inc., another family business owned by Sandy and Floyd Faulk. She was named Older Worker of the Year in 2001 by the Southwest Georgia Council on Aging. Mary is survived by her three children, Frank Foy Faulk III (Christie) of Marietta, Laurie Alford Faulk Montgomery (Erick) of Augusta, and Floyd Crawford Faulk (Sandy) of Albany. She is also survived by six grandchildren: Mary Katherine Faulk Mason (Reagan) of Clyde, North Carolina, Ivey Loy Faulk Karwowski (Dennis) of Saint Clair Shores, Michigan, Crawford Wright Montgomery and Mary Simpson Montgomery (“Molly”) both of Augusta, Frank Rochester Montgomery (“Chet”) of Oakland, California, and Cameron Owen Faulk of Albany. There are five great-grandchildren. She had countless close friends in Albany and everywhere she lived or visited, and she was always excited to go on trips with her friends and family. She was so appreciative of all the calls, texts, and cards she received from friends over the past year during her stay in Augusta. Services will be held at Saint Paul’s Episcopal Church, 212 North Jefferson Street, Albany, Georgia on Tuesday, December 3, 2019 at 2:00 P.M., followed by committal in the church columbarium, and a reception in the parish hall. In lieu of flowers, the family requests donations be made to Saint Paul’s Episcopal Church, 212 North Jefferson Street, Albany, Georgia 31701.

Mary Mays Alford Faulk, 88, passed away Tuesday, November 27, 2019 in Augusta, Georgia at the home of her daughter, Laurie Montgomery. The only child of Green Floyd Alford, Jr. and Mary Crawford Mays, she was born in Albany on December 12, 1930. As... View Obituary & Service Information

The family of Mrs. Mary Alford Faulk created this Life Tributes page to make it easy to share your memories.

Send flowers to the Faulk family.