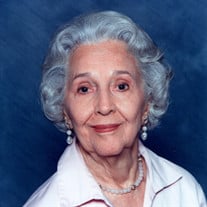 Mrs. Margaret Anderson English Truitt, a lifelong resident of Albany, GA died peacefully with her family at her side at the age of 95 on Thursday August 22, 2019 at the Phoenix of Albany. A memorial service will be held in her honor on Monday August 26, 2019 at First United Methodist Church of Albany in the Walden Chapel at 2:00 PM. Visitation will be held an hour before hand with a private interment to follow. Margaret Anderson was born in Albany, GA on December 13, 1923, the daughter of Madison J. Anderson and Rosa Walker Anderson. She was predeceased by her parents, her two sisters, Kathryn A. Stubbs and Jean A. Creech and by her husbands, William Samuel English and Robert F. Truitt and her grandson, Anderson W. English. Margaret graduated from Albany High School, Class of 1940. She married William S. English, of Kinsale, VA in 1947. They raised two sons, Lewis W. English and William S. English Jr. on Hilltop Drive until they were grown. After the death of Mr. English in 1994, she married Robert Truitt to whom she was married for 10 years. Mrs. Truitt was a devout Christian and a member of Albany First Methodist Church, the Fellowship Sunday School Class and was a member and past president of the Albany Charity League and the Town and Country Garden Club. She was truly a Southern Lady, who always had a love for the water and especially the beach, enjoying many years with her family and friends at the English Beach Cottage in Laguna Beach, FL, since it was built in 1972. In addition, she loved the outdoors, especially fishing, which she shared with her sons, her grandchildren, her great-grandson and anyone else that would go with her. She also had the travel bug and was blessed to have been able to travel the world snow skiing in Switzerland, hang gliding in New Zealand and riding elephants on three continents. Margaret was generous, kind and loving with a wonderful sense of humor and she will be greatly missed by her family and her many friends. Surviving her are her two sons, Lewis and his wife, Laine English of Peachtree City, GA along with their daughter, Danielle Scholfield and her husband, Charles and their son. Charles E. Scholfield III of Omaha, NE. Bill English and Martha of Roswell, GA along with his daughter Briana Bauer and her husband Dennis and their son, Lloyd W. Bauer. Also, her nephew, Larry Almand of Sylvester, GA whom she thought of as a third son and other nieces and nephews Linda Singletary, Terry Creech, Natalie Gavalas, Mary Sue Newton, and Virginia Beale Pickering. As well as her step children Robert F. Truitt, Jr., Forrest Truitt and his wife Virginia, Ellen K. Eidson and her husband Hank. In lieu of memorial please make donations to First United Methodist Church or the Salvation Army.

Mrs. Margaret Anderson English Truitt, a lifelong resident of Albany, GA died peacefully with her family at her side at the age of 95 on Thursday August 22, 2019 at the Phoenix of Albany. A memorial service will be held in her honor on Monday... View Obituary & Service Information

The family of Mrs. Margaret Anderson English Truitt created this Life Tributes page to make it easy to share your memories.

Send flowers to the Truitt family.