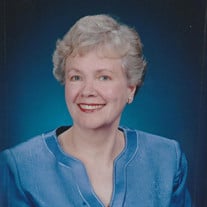 Mrs. Margaret Pearce Svoboda passed away peacefully October 31, 2021 at the age of 82. The family will receive friends at Kimbrell-Stern on Saturday, November 6, 2021 from 3-4 PM. There will be a private burial at Andersonville National Cemetery. Peggy was born November 24, 1938 in Morristown, NJ, to Franklin Kenneth Pearce and Gladys Tumpore Pearce. Her family moved to Albany when she was 16, and she graduated from Albany High School in 1956. She attended Wesleyan College in Macon, GA and received her Bachelor of Arts degree in History in 1960. She received her Master’s Degree in history the following summer, from Duke University. She came home to Albany and taught 7th grade at Macintosh. It was during this time that she met the love of her life, Lt. Robert “Bob” Svoboda, a young, dashing Air Force pilot stationed at Turner, AFB. Peggy relished her life as an Air Force wife and took delight in every move. The family lived in Pensacola, FL, Plattsburg, NY, and Ramstein AFB, Germany (where they took every opportunity to travel across Europe in a VW Station Wagon). Once they returned stateside, they continued their moves with stations to Scott, AFB, IL, Prattville, AL, Newport, RI, Dover, DE, and Andrews, AFB where Robert served as Vice Commander, and Peggy worked as a diplomat at the Convention Center in Washington, DC. After being widowed in 1986, Peggy returned to Albany, where she prayed for the Lord to use her service to others. She was instrumental in starting the local Habitat for Humanity, was a dedicated volunteer for Meals on Wheels, was a member of the Albany Women’s Club, The Daffodil Garden Club, The Charity League of Albany, and an active member of Porterfield Memorial United Methodist Church with her circle of cherished friends. She was a lifelong Braves fan and would have enjoyed seeing her team advance to the World Series. Her greatest joy was being a grandmother of five, and she was affectionately know as “GG.” She is preceded in death by her husband, her parents, her brother, Franklin K. Pearce or Orient Point, Long Island, and her beloved baby sister and best friend, Jeanne Pearce Wileen of Albany. She is survived by her daughters: Susan Svoboda Simmons (Kent) of Albany, Stephanie Svoboda Bradley, of Greeley, CO; her granddaughters: Emily Simmons, and Abigail Pearce Simmons, and her grandsons, Stephen Robert Bradley, Spencer Christian Bradley (Brittany), and Samuel Luke Bradley. In lieu of flowers, donations may be made to Meals on Wheels, C/O SOWEGA Council on Aging, 355 W. Society Ave., Albany, GA 31701, or Albany Habitat for Humanity, 2515 Old Dawson Rd., Albany, GA 31707.

Mrs. Margaret Pearce Svoboda passed away peacefully October 31, 2021 at the age of 82. The family will receive friends at Kimbrell-Stern on Saturday, November 6, 2021 from 3-4 PM. There will be a private burial at Andersonville National Cemetery. Peggy... View Obituary & Service Information

The family of Margaret Pearce Svoboda created this Life Tributes page to make it easy to share your memories.

Send flowers to the Svoboda family.