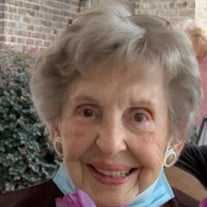 Louise Benjamin Fallis, was born August 19, 1926, in Atlanta to the late Ray Neel Benjamin and Evelyn Hunt Benjamin. She attended Atlanta public schools and graduated from North Fulton High School in 1944. She attended what is now Georgia State University majoring in business. She married her husband of 66 years, Simeon E. Fallis, an architectural student at Ga. Tech on June 15, 1950. After he received his Bachelor of Architecture degree in June, 1951, they moved to Albany in July of that year and he began his architectural internship with the firm of Dennis & Dennis, Richard V. Richard Assoc. He began his own practice in 1958. She was a member of Porterfield Memorial United Methodist Church, where she was a tutor in their Whiz Kids Program. Louise was active in many civic activities over the years. Among those was the Community Concerts Assn., where she served on the board and wrote the organization's history in the bicentennial year. She was a member of Thronateeska Chapter DAR, Chapter AH P.E.O, a life member of the Albany Charity League, and had held offices in each of these organizations. She was also a regional storyteller. After their children were in college, Louise returned to college and earned her degree in early childhood education, graduating Summa Cum Laude at Albany State College. She worked in the Title One program in Dougherty County teaching remedial reading and math, retiring in 1989. She was a Life member of the GA Retired Educators Assn. She is survived by her sons W. Neel Fallis and his wife Deborah, New Orleans; Mark A. Fallis and his wife Donna, Milton, GA; three grandsons: David A. Fallis and wife Abby, Jonathan M. Fallis and wife Tory, and T. Michael Fallis, all of Atlanta; sister, Katilou Benjamin Murchison, Decatur; four great grandchildren, several nephews and a niece. Funeral services will be at 2 PM on Monday, February 1, 2021 at Porterfield Memorial United Methodist Church with William Collins conducting with burial to follow in Parrott City Cemetery, Parrott, GA. The family will receive friends on Monday at Porterfield prior to the service beginning at 1 PM. Masks will be required and social distancing will be practiced per CDC guidelines. In lieu of flowers please make contributions to Porterfield Memorial United Methodist, 2200 Dawson Rd., Albany, GA 31707 Church or a favorite charity.

The family of Louise Benjamin Fallis created this Life Tributes page to make it easy to share your memories.

Send flowers to the Fallis family.