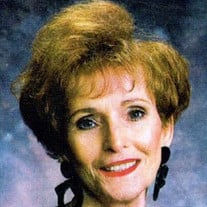 Leslie Kennedy Nadrich, 83, of Albany, died Sunday, October 20, 2019 at her home. Her funeral service will be 11 AM on Thursday, October 24, 2019 at the graveside at Riverside Cemetery. Chaplain Mark Hughes will officiate. Mrs. Nadrich was... View Obituary & Service Information

The family of Mrs. Leslie Kennedy Nadrich created this Life Tributes page to make it easy to share your memories.

Send flowers to the Nadrich family.