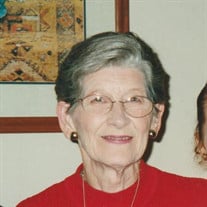 Lavon Willard Boyett, 88, died Sunday, July 11 at Magnolia Manor in Americus, GA. Her funeral service will be at 10 AM on Saturday, July 17, 2021 at the First Baptist Church of Albany, 145 Oakland Parkway with interment to follow at Crown Hill Cemetery. The Rev. Dr. Butch Knight will officiate. The family will receive friends prior to the service at First Baptist Church beginning at 9 AM. Lavon peacefully departed her life on earth on Sunday July 11th surrounded by family to begin her promised reward of everlasting life in Heaven. Lavon’s life was centered around God, family, church and friends. She supported and served them all. She was saved in 1941 and never wavered from her walk with the Lord through good times and bad. With her family she was involved in all aspects and attended all functions her husband or kids were involved in. She was at every game or event cheering on the whole team, not just her kids or grandkids. She led by example via her service to others with various organizations and charities. With her church she was involved on almost every committee at one point or another but was always involved in teaching Sunday School and singing in the choir. Through her work at Walden & Kirkland, First Baptist Church of Albany, the Pastoral Counseling Center and Palmyra Park Medical Center Rehab she befriended many clients and co-workers and maintained these friendships throughout her whole life. Lavon leaves behind a gift for service, caring and empathy that will live on in all those that she touched. Lavon was preceded in death by her husband, Norman E. Boyett, Jr., her son, 1St. Lt. John Boyett, USMC, her parents, John Thomas Willard and Laura Lancaster Willard, a sister, Minnie Parrish, and a brother, Nelson Willard. Lavon is survived by a son: Andy Boyett, Albany; two granddaughters: Drew Boyett, Albany, Sara Campbell, Albany; sister in law: Mary Martin; numerous nieces and nephews. The family wishes to thank the staffs of Sumter Retirement Village, Magnolia Manor, and Phoebe Sumter Hospice. Those desiring may send memorials to the Worship Ministry of First Baptist Church of Albany, 145 Oakland Parkway, Leesburg, GA 31763. You may sign the online guestbook at www.kimbrellstern.com.

Lavon Willard Boyett, 88, died Sunday, July 11 at Magnolia Manor in Americus, GA. Her funeral service will be at 10 AM on Saturday, July 17, 2021 at the First Baptist Church of Albany, 145 Oakland Parkway with interment to follow at Crown Hill... View Obituary & Service Information

The family of Lavon Willard Boyett created this Life Tributes page to make it easy to share your memories.

Send flowers to the Boyett family.