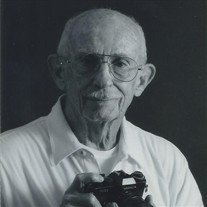 Laurence R. Gray, 88, of Mitchell County, GA went to his Heavenly home Saturday, June 1, 2019. Larry was born August 28, 1930 in Charlottesville, VA to L.R. Gray, Sr. and Mary Elizabeth Gray. He was an Army Officer, serving during the Korean Conflict. Upon his return home, he continued to serve as a police officer where he retired from the Albany Police Department in 1990 as a Captain of Detectives. After his retirement he continued to contribute to the betterment of the Albany community as a professor at Meadows College. Larry’s greatest source of joy and responsibility after retirement was to the Boy Scouts of America, where he volunteered countless hours to shape future generations. He served as Scout Master of Troup 51 out of Camilla. He was an active member of the Order of the Arrow and the Fox Patrol for wood badge, where his nickname was Old Fox. As the Quarter Master, he staffed the wood badge courses. He also served as the Shooting Sports Director at Camp Osbourne and in 2005 the archery range was named in his honor. In addition to his local support, he made many donations to Brookfield Pack 41 in Missouri. To those who knew him best, Larry was most lovingly known as Papa. Pa was proceeded in death by his wife, and our Mama, Carrie J. Gray. Together they enjoyed fishing, camping, motorcycle riding, bowling, dancing, attending bluegrass festivals, and woodworking. During their lives together, they built a family. Papa was survived by his four daughters and their families as follows: Carla S. Thibeault and her husband Robert H. Thibeault, their children Cricket Dowdy and her husband, Michael Dowdy, and Robert L. Thibeault, Pa’s namesake, affectionately known as Little Larry, Lorinda F. Frock and her husband Rob Frock and their children Kristin Keck and her husband, Jason Keck, Jessica Foster and her husband, David Foster, Cassie Schmidt and her husband, Edward Schmidt, Dace Frock and his wife, Heather Frock, Latisia L. Wiggins and her daughter, Lorinda M. Webb, Shonna Kae Wiggins and her children, Tracy O. McDonald and Seth Griffin. Papa was also survived by his many great-grandchildren: Tyler Fernandez, Rylee Frock, Dane Frock, Madison Foster, Bradley Foster, Allyson Foster, Kadie Foster, Chloe Schmidt, Madeline Schmidt, Nate Frock, Weston Frock, and Myles McDonald. We are forever grateful to have had Papa in our lives. He was so much to so many and his amazing love and kindness will live on in each of us until we meet again. Donations can be made to the South GA Council Boy Scouts of America in remembrance of our beloved Pa. To share your thoughts with the Gray family, you may visit our website at www.kimbrellstern.com.

The family of Mr. Laurence Roderick Gray Jr. created this Life Tributes page to make it easy to share your memories.

Send flowers to the Gray family.