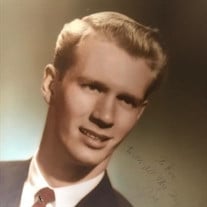 Joseph G. Wallis passed away peacefully in Atlanta, Georgia on January 9, 2021 with his daughters by his side. Joe was the very embodiment of a strong, Southern gentleman. Born in Albany, Georgia on January 21, 1935, Joe was the middle son of James Edwin Wallis and Francis Mary Gilbert. He had two brothers, James and Robert. Joe was an acolyte at St. Paul’s Episcopal Church and a star football player at Albany High School. Playing on the defensive line as a “tackle,” Joe was a standout. In his high school yearbook senior year, his caption read “Not ever serious, never too frivolous, a rare good fellow.” Joe decided to join several close friends and enlist in the Marines after high school. He went to boot camp in Camp Pendleton near San Diego, California and was eventually stationed at Treasure Island off the coast of San Francisco. He loved his time in the Marines playing football and boxing for the Marine Corps teams. He also often regaled his children and grandchildren with the tales of time spent at the Marines Memorial Club in San Francisco. During his time in the military, Joe caught the eye of legendary football coach Bobby Bowden who was then coaching at South Georgia College. Joe played for Bobby and went from there to Florida State University’s football team where his teammates included Hollywood actor Burt Reynolds and ESPN commentator Lee Corso. Years later, when the Seminoles and Coach Bobby Bowden were playing in the Fiesta Bowl, Joe and Bobby had a chance to reunite at a luncheon and Bobby clearly remembered him, describing him as “the tall blond kid who didn’t talk much.” In 1959, a shoulder injury ended Joe’s football career and he moved to a boarding house in Atlanta to look for a job. The daughter of the family that owned the boarding house worked at First National Bank of Atlanta and helped Joe get his career start as a clerk at the bank. Over the next 21 years, he worked his way up to Vice President and Manager of the Corporate Trust Department and earning his Bachelor of Marketing degree from Georgia State University. During that time, Joe met the love of his life, a “funny talking limey” from Liverpool, England, Eveline Graham. Although they both worked for First National, they didn’t meet until their paths crossed on a Florida beach and Joe asked Eve if “she had a license for sunbathing.” A whirlwind romance ensued. In December, Eve was scheduled to board the Queen Mary and sail back to England. The night before she was to board the ship, Joe proposed and the rest is history. Joe and Eve had two daughters, Jana Wallis Earnest and Tina Wallis Scully and five grandchildren Brooke, Connor, Graham, Billy and Grace and a great granddaughter, Josie. They moved to Davie, Florida in 1979 where Joe began working at the First National Bank of Hollywood and later the Jefferson National Bank of Miami Beach where he served as Vice President and Senior Trust Officer. Joe loved the Florida sunshine and the elderly clients at Jefferson National Bank loved Joe’s slow southern drawl and kindly manner. It was the perfect match. Joe and Eve enjoyed traveling extensively in England and throughout Europe. Over the years, they owned a home on the beach in Palm Beach, atop a mountain in Clayton, Georgia, in a retirement community in Sun Lakes, Arizona and finally back in Atlanta, Georgia where their lives together began. In their final years, they enjoyed their time at Atria Alpharetta making numerous friends and trying new activities. To his daughters, Joe was Atticus Finch, from To Kill a Mockingbird, personified. Never a big talker, he simply “walked the walk.” Living a life filled with integrity, Joe was honest, had an incredible work ethic and faith-filled. He spent time every night of his adult life, on his knees, thanking God for his blessings and seeking guidance. He was a past senior warden of his church and an active member of St. Patrick’s Episcopal Church in Atlanta, Georgia. Joe went to church every Sunday of his adult life setting an example for his children to follow. He made multiple generous donations in his lifetime but never sought recognition or thanks. It was his “magnificent obsession.” Joe’s athleticism continued throughout his life as he continued swimming, playing tennis and golf, running and even practicing yoga in the 70’s before it was popular. Perhaps that is what kept Joe eternally youthful. He was often asked if he was 20 years younger than he appeared, he just never seemed to age. He was known for saying “I’m going to live to be 100!” He didn’t make it. After Eve passed away in 2018, Joe would often remark to his daughters, “I’m just a lost soul without your mother.” Today he is reunited at long last with his soulmate. We love you Dad. You were our rock and the very best example of what a father should be. God bless you Dad, you had a wonderful life. A memorial will be held at Georgia National Cemetery in Canton, Georgia on February 5, 2021.

The family of Joseph Gilbert Wallis created this Life Tributes page to make it easy to share your memories.

Joseph G. Wallis passed away peacefully in Atlanta, Georgia on...

Send flowers to the Wallis family.