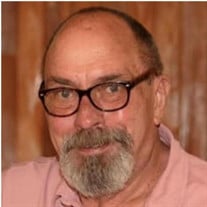 John Michael Clark (Mike - Uncle Spike) Clark, passed away at his home in Albany, GA on October 2, 2021 at the age of 69. He was born on March 17, 1952 in Shreveport, LA. He was preceded in death by his parents, William Charles Clark, Jr. and Marilyn Riley Clark and his sister, Melanie Lee Clark Andrews. Mike graduated from Louisiana Tech in 1974, Bachelor of Fine Arts. He started his career in advertising but soon found his passion for art in television graphics where he worked at WBRZ in Baton Rouge, LA for 25 plus years. In 1988, he met the love of his life, Bonnie Bradshaw Clark. They moved from Baton Rouge to New York, where Mike accepted a job with Chyron Graphics. He was the product manager with the INFINIT! line of graphics equipment, which are still an industry standard. In 1996, he was offered a job as the Lead Graphics Designer for Fox News. He was instrumental in creating graphics that are still used today on-air. Mike worked graphics on the 1992 Olympics Albertville, France. He produced graphics for X-games, the Emmys, Tony Awards, the Grammy Awards, the Country Music Awards, the Olympics in Spain and Atlanta. He was instrumental is the process of bringing MTv Japan on-air. He received an Emmy award for his design of the graphics manual used at the 1996 Atlanta Olympics and received a nomination for his design work for Fox News. In 1999. By far, his greatest achievement was his family. He loved him with all his heart and soul. He is survived by his wife of 33 years, Bonnie Bradshaw Clark, his daughter, Heather Lynn Hicks Spence (Mike), his son, Jake Clark, two granddaughters, Jocelynn Marie Spence and Brooklynn Kennedy Spence. His twin brother, William Charles Clark, III (Ellen), a sister, Doris Parmer Clark, and nephew Luke Parmer. A memorial service will be held at Kimbrell-Stern on Friday, October 8th at 11:00 am. Family visitation will be at 10:00 am.

John Michael Clark (Mike - Uncle Spike) Clark, passed away at his home in Albany, GA on October 2, 2021 at the age of 69. He was born on March 17, 1952 in Shreveport, LA. He was preceded in death by his parents, William Charles Clark, Jr.... View Obituary & Service Information

The family of John Michael Clark created this Life Tributes page to make it easy to share your memories.

Send flowers to the Clark family.