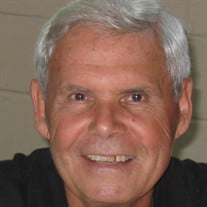 Joedy David Putnal, Sr. passed away peacefully on Friday, December 11th at the Willson Hospice House. He was 88 years old. For decades, he was a holiday fixture in the Albany area as the owner of Busy Elves Christmas Tree and Blueberry Farm, although he assumed that role only after a long and successful career in the insurance business. He was born in Mayo, FL August 2, 1932 to Zebblin H. Putnal and Pearl Jackson Putnal. He grew up on a farm on the banks of the Suwannee River. After serving two years in the U.S. Army stationed in Germany, he returned to the states and began a 41-year career with Independent Life Insurance Company. After starting with the company in Macon, he transferred to Albany in 1959 and was later promoted to a district manager position. He spent the last 11 years of his career with Independent Life at the corporate office in Jacksonville, Florida, before retiring and moving back to Albany. Upon his return to Albany, in 1997 he turned his full attention to growing his Christmas tree operation in Lee County. His hobby quickly became his passion. He provided numerous varieties of Christmas trees, and eventually began growing blueberries for his u-pick operation. His fun-loving spirit and outgoing personality created an extremely loyal customer base for generations. In 2019 he retired from farming. He was actively involved in many organizations throughout his life, including the Georgia State Association of Life Underwriters, Toastmasters, Kiwanis, and the Georgia Christmas Tree Growers Association. For many years he volunteered as a hunter safety instructor for the Georgia Department of Natural Resources. He was a devoted member of the Beattie Road Church of Christ. Survivors include his beloved wife of 64 years, Marguerite C. Putnal, his three children Anita Lindsey of Albany, Joedy David Putnal, Jr. of Atlanta, and Pamela Roberts of Leesburg, his grandchildren Jessica Glow of Leesburg, Laura Lindsey of Atlanta, Emily Miller of Tifton, Isabel Putnal of Melbourne, Australia and Margaret Putnal of Lexington, Kentucky, four great grandchildren Abby & Jack Glow and Harper & Carter Miller. He is also survived by his two sisters, Louise Bell of Lilburn, GA and Lillie Mae Wadsworth of Montgomery, AL. A private family service will be held at a later date to honor his memory and celebrate his life. In lieu of flowers donations may be made to the Willson Hospice House, 320 Foundation Lane, Albany, GA 31707

Joedy David Putnal, Sr. passed away peacefully on Friday, December 11th at the Willson Hospice House. He was 88 years old. For decades, he was a holiday fixture in the Albany area as the owner of Busy Elves Christmas Tree and Blueberry Farm,... View Obituary & Service Information

The family of Mr. Joedy David Putnal, Sr. created this Life Tributes page to make it easy to share your memories.