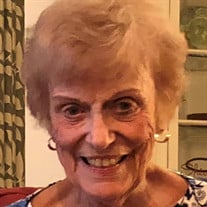 Joan Elizabeth Lindsey Campbell died October 15, 2021. She was born November 26, 1933, in Thomasville, Georgia, the beloved only child of Clayton M. and Marjorie Hoagland Lindsey. She grew up in Thomasville and graduated in 1952 from Thomasville High School, where she made many friends whom she remained close to all her life. In 1952, Joan was crowned the Thomasville Rose Queen and a photograph of the event was featured in National Geographic magazine. Joan attended the University of Georgia, where she was vice-president of Chi Omega Sorority. She later transferred to Florida Southern, in Lakeland, Florida. In 1955, she married James Alexander “Sonny” Campbell Jr., and moved to Thomaston, Georgia. In 1957, they moved to Albany, Georgia, where they resided for over 60 years until moving to Athens in 2020, to be closer to their daughter. Joan was a Life Member of the Charity League of Albany and a member of the Albany Junior League. She volunteered at Phoebe Putney Hospital and in her children’s schools when they were younger. She enjoyed reading, traveling and her volunteer work. Her home was the center of many family holiday celebrations. Joan loved spending time with her children and grandchildren, especially during their annual beach trip to Cape San Blas, Florida. Joan is survived by her husband of 65 years, James Alexander “Sonny” Campbell, Jr., of Athens, son, James “J.” (Regina) Campbell, III, of Largo, Florida, daughter, Lindsey (Barry) Shiver of Watkinsville, Georgia, grandchildren, Brenton (Stephanie) Shiver, Clayton (Jamie) Shiver, Cutler Shiver, Ali Campbell (Will) Shanahan, Jacob Campbell and one great-grandson, Campbell Shiver. A private family graveside service will be held at Crown Hill Cemetery in Albany. In lieu of flowers, donations can be made to the Susan G. Komen Breast Cancer Foundation, the American Cancer Association, or the Salvation Army.

Joan Elizabeth Lindsey Campbell died October 15, 2021. She was born November 26, 1933, in Thomasville, Georgia, the beloved only child of Clayton M. and Marjorie Hoagland Lindsey. She grew up in Thomasville and graduated in 1952 from Thomasville... View Obituary & Service Information

The family of Mrs. Joan Lindsey Campbell created this Life Tributes page to make it easy to share your memories.

Send flowers to the Campbell family.