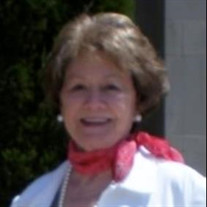 Jeanette Adams Daniel, 83, of Albany, Georgia, died on September 17, 2020, from cancer. A private interment will be held on Sunday, September 20th at the Leesburg Cemetery. A celebration of Jeanette's life will be held on Saturday, October 3rd, from 2 to 5 pm at 2354 Gwendale Drive East, Lizella, Georgia. Typical obituary formats sum up a life through a linear listing of achievements; an accepted shorthand for a purposeful life. A typical obituary fails Mom. If custom prevailed, she'd be condensed. She was one of nine children who grew up on a tenant farm. She graduated from Turner County High School with the distinction of "thank the Lordy." After graduating, she moved to Albany for a bank job. One day while on break from the bank, she spotted Louis Adams strutting down Pine Street and boldly told her co-worker, "I'm going to marry that man." She did on March 1, 1969. I was born in 1971, the only child of my parents. Throughout her life, Mom worked jobs. In the early 1980's, she became the first female levying officer in the Georgia Department of Revenue's Albany office. She showed up on her first day in a white pencil skirt, hot pink blouse, and three-inch heels! After 20 years of service, she retired having made believers of the skeptics who thought the position ill-suited for a woman. Widowed in 1993, she relocated to Macon, Georgia, where she later married Dr. Joe Daniel. Utterly lost in the narrow confines of the typical obituary is Mom's substance, essence, and heart. My Mom loved words. She hoarded copies of poems, wit, and wisdom in her pockets, purse, and even in old tax return files. She spun tremendous, clever, highly flourished stories. She loved to iron and labeled it "cheap therapy." Her cheese wafers were legendary; the best part of Christmas for those lucky enough to score a tin. She was silly and fun. She once pretended it was correct to eat the banana peel while tossing away the banana. So convincing was her act that her granddaughter, rolling in laughter, wet her pants. Undoubtedly, Mom knew her "greatest achievement" did not translate well into a column inch. Indeed, her greatest achievement is her enthusiastic, generous investment into others' lives. In middle school carpool her granddaughter said, "Nana, I have no idea what my purpose is but today my Bible teacher said we all have one, so we need to start looking for mine." Mom pulled the car over and said, "I've struggled with this very thing my whole life, and every day I pick you and Philip up I realize that my purpose isn't to be big, important or grand. Nothing makes me more content than being my grandchildren's biggest cheerleader and sharing God with you. That is my purpose and that is noble." Jeanette was the widow of Louis Adams of Albany, Georgia, and Dr. Joe Daniel of Macon, Georgia. She is survived by her daughter, Ivy Adams Oxendine, her son-in-law, John Oxendine, her grandchildren, Philip Dunn, Caroline Dunn, Jake Oxendine, and J.W. Oxendine, her siblings, Marie Jenkins, Leon Ellerbee, Shelvy Elder, and Fonda Cox, and her sister-in-law, Esther Dobson.

Jeanette Adams Daniel, 83, of Albany, Georgia, died on September 17, 2020, from cancer. A private interment will be held on Sunday, September 20th at the Leesburg Cemetery. A celebration of Jeanette's life will be held on Saturday, October 3rd,... View Obituary & Service Information

The family of Mrs. Jeanette Adams Daniel created this Life Tributes page to make it easy to share your memories.

Send flowers to the Daniel family.