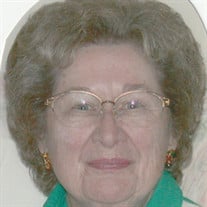 Jean Elizabeth Bryant Tucker, 91, a resident of Albany, Georgia for almost 70 years, passed away on January 2, 2021 at Phoebe Putney Memorial Hospital. Private funeral services for immediate family members will be held Wednesday at 11:00 am at Crown Hill Cemetery. Rev. John Spencer will officiate. Jean was born on November 19, 1929 in Moultrie, Ga. to the late Ora Ellen Pipkin Bryant and Simeon Dykes Bryant. After graduating from Moultrie High School in 1946, she attended Ga. State Women's College for two years then graduated from Moultrie Business School in Secretarial Science in 1948. Jean married Thomas Wilkes Tucker, also of Moultrie, on June 13, 1948; they resided in Atlanta for two years until Tommy graduated from Georgia Institute of Technology. Tommy, a World War Two Air Force veteran, was recalled to the Korean War and posted to Walker Air Force Base in Roswell, New Mexico where he served under the Base Engineer. Jean worked for Liberty Mutual Insurance Company in Atlanta and General Tank & Steel in Roswell. In 1951 she and Tommy moved to Albany where she devoted her life to creating and maintaining a happy and loving home for her husband and three children; she continued to be a generous and supportive Mom until the day she died. Jean worked for Southern Wholesale Distributors and later for Tri-State Tractor Company; she and Tommy were members of the First Baptist Church in Albany, and later Charter members of Sherwood Baptist Church. Jean was also a member of the Albany Junior Women's Club. Jean was an avid animal lover and a lifetime member of the Albany Humane Society, serving on the Board of Directors for 3 terms and helping to raise funds to build their first building on Oakridge Drive. She was Chairman of the Cookbook Committee, and volunteered seven days a week for six years in the Humane Society's cat room. Jean rescued and lovingly cared for many cats and dogs at her home, and tirelessly advocated for homeless and abused animals her entire life. Jean will forever be remembered as a loving wife, mother, grandmother and great-grandmother who cherished her family. She was preceded in death by her husband Thomas Wilkes Tucker, her mother Ora Ellen Pipkin Bryant, her father Simeon Dykes Bryant, her sister Ellen Annette Bryant Davis, and her son Jeffrey Craig Tucker. Survivors include her daughters, Diane Tucker Kelly (Kevin) and Debbie Tucker Deacon (Ray), her grandchildren William Chase Kelly (Sara), Thomas Trace Tucker and Jennifer Elizabeth Tucker, and her great-grandchildren Weston Packer Kelly, Sidney Joan Kelly, and Davis Kingston Tucker. In lieu of flowers, please make donations in memory of Jean Tucker to the Albany Humane Society, 1705 W. Oakridge Dr. Albany, Ga. 31707.

The family of Mrs. Jean Bryant Tucker created this Life Tributes page to make it easy to share your memories.

Send flowers to the Tucker family.