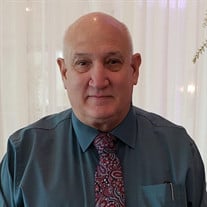 James L. Herman, Jr., 64 of Albany, passed away peacefully in his sleep Saturday, July 24, 2021 after a lengthy illness that began at the time of Hurricane Michael, October 2018, and had to be Life Flighted to UF Shands Cardiac Center, Gainesville, FL as soon as it passed. He endured much pain and suffering during the past three years and now is safe and well in the arms of his Savior, Jesus Christ. Mr. Herman was of the Baptist faith and a Christian. Mr. Herman was born December 17, 1956 in Titusville, PA and moved to Melbourne, FL with his family when he was two years old. He graduated from Eau Gallie High School in Melbourne. He worked as a manager for Publix Stores in Florida and a Supervisor for Tree of Life/Specialty Foods in Florida for many years which required him to travel all over the Southeast. Due to his extensive travel he could find his way to any supermarket in any city in the Southeast. After moving to Albany he began working for Blackbeard’s Restaurant for approximately 14 years until the onset of his illness forced him to take a medical retirement. Mr. Herman was known for his integrity and dedication to his work and for his fairness and devotion to the employees who became his second family whom he dearly loved. He worked many hours sacrificing much. Whenever he could he made a point to visit the restaurant which he missed so much and check on everyone. Mr. Herman loved to sing gospel songs and was known for all the jokes he loved to tell. He saw the good in everyone and did not speak badly about anyone. Mr. Herman was preceded in death by his father, James Leroy Herman Sr, his brother-in-law, Jeff Darnofall, his stepfather, Gene Redlinger: his former wife, Della Theresa Collins Herman; his grandparents, aunts and uncles. He is survived by his wife, Beverly Sutton Herman; his daughters, Katrina Herman Akin (Jeff) Deltonia, FL; Terra Herman, Jacksonville, FL; Jessi Herman Nejal (Art) Jacksonville, FL; and Angela Davis Klein (Nate), Albany, New York. He was a dearly beloved Pepaw to 13 grandchildren; Chaz Herman, Brianna Herman Lewis, Ethan Nejal, Selena Nejal, Chelsea Nejal, Hailey Nejal, Artiria Nejal, Gracie Griffin, Marissa Griffin, Jayden Bradford, Conner Akin, Trevor Akin, Emily Klein and Rachel Klein and 2 great grandchildren, Nova Lewis and Cali Keaton and a number of nieces and nephews. He is also survived by his mother, Mary Lou Redlinger, Jacksonville, FL; brother, Rod Herman (Deb), Deltona, FL; sisters, Bonnie Darnofall, Jacksonville, FL; and Sandi Blocker Mammen, Gulf Breeze, FL and a brother-in-law, Ronald Sutton (Libby) Largo, FL; mother-in-law, Marjorie M. Sutton; and a life-long friend, John McKinney, Palatka, FL. He is also survived by two precious furbabies, Coco and Bayne (who was his shadow and companion protector throughout his illness). Mr. Herman was devoted to his family and loved them with all of his heart and was looking forward to visiting them all in the near future. He was an avid fisherman, sportsman, gardener and a former member of the Albany Bass Club until the onset of his illness. He loved all sports and coaching kids. Kimbrell-Stern Funeral Directors, Albany, Georgia, is in charge of funeral arrangements. Visitation and a graveside service will be held Saturday, August, 14, 2021 at Crown Hill Cemetery in Albany, Georgia beginning at 1:00 p.m. Those who wish to may donate to the James Herman burial fund may do so by contacting Kimbrell-Stern Funeral Home directly.

James L. Herman, Jr., 64 of Albany, passed away peacefully in his sleep Saturday, July 24, 2021 after a lengthy illness that began at the time of Hurricane Michael, October 2018, and had to be Life Flighted to UF Shands Cardiac Center, Gainesville,... View Obituary & Service Information

The family of Mr. James Leroy Herman Jr. created this Life Tributes page to make it easy to share your memories.

Send flowers to the Herman family.