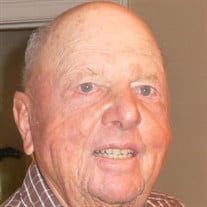 James Alexander “Sonny” Campbell, Jr., 90, died November 14, 2021. He was born September 21, 1931, in Thomasville, GA. He was the son of James Alexander Campbell II and Corlene Hurst Campbell. He grew up near Thomasville, Georgia, spending time in Fitzpatrick, Alabama, with his father’s family, and summers in Chillicothe, Ohio, on his mother’s family farm. Sonny graduated high school in 1950, from Stark University School, in Montgomery, Alabama. In 1955, he graduated from Florida Southern College, where he pledged SAE fraternity, was President of the Student Body, and was Co-Colonel of the ROTC cadets. In 1955, Sonny married Joan Elizabeth Lindsey of Thomasville, Georgia, and moved to Thomaston, Georgia. In 1957, they moved to Albany, Georgia, where they resided for over 60 years until moving to Athens in 2020, to be closer to their daughter. Sonny was an Albany entrepreneur who owned several service stations. Long after he officially retired, he continued to work at the station in order to visit with longtime patrons and friends. Sonny was an avid golfer, learning the game from his father. As a teenager, he played with the legendary Babe Didrikson Zaharias and was on the golf team in college. He was quite accomplished, winning several tournaments, and into his 80’s he continued to receive awards for shooting less than his age on multiple occasions. He was a sportsman who enjoyed hunting and fishing and was a member of the B.P.O. Elks Lodge of Albany. He was recently preceded in death by Joan Campbell, his wife of 65 years. Sonny is survived by his son, James “J.” (Regina) Campbell, III, of Largo, Florida, daughter, Lindsey (Barry) Shiver of Watkinsville, Georgia, grandchildren, Brenton (Stephanie) Shiver, Clayton (Jamie) Shiver, Cutler Shiver, Ali Campbell (Will) Shanahan, Jacob Campbell and one great grandson, Campbell Shiver. Services will be held Sunday, Nov. 21, at noon, at Kimbrell-Stern in Albany. Visitation will be one-half hour before the service. In lieu of flowers, donations can be made to The Red Cross, the American Heart Association, or the American Cancer Society.

The family of James Alexander "Sonny" Campbell, Jr. created this Life Tributes page to make it easy to share your memories.