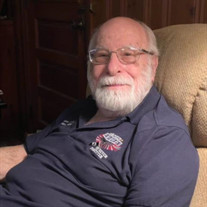 Lieutenant Commander Howard Kenneth Tyus Sr. 85, died peacefully on January, 15 2021 surrounded by his loving family. His funeral service will be at 2 PM on Wednesday, February 10, 2021 at Kimbrell-Stern. The Rev. Thad Haygood will officiate. The family will receive friends at Kimbrell-Stern on Wednesday one hour prior to the funeral beginning at 1 PM. Mr. Tyus will be buried at a later date at Palmetto Cemetery in Brunswick, GA. He was preceded in death by his father Howard Kelly Tyus, Mother Minnie Louise Tyus, and his brother Harold Tyus. Ken was married to Marion Akridge Tyus for 59 and a half wonderful years. Ken was a great husband, father, and grandfather. He had many friends. His friends always enjoyed his sense of humor. It was important to Ken for his friends to relax a little and enjoy life. His family, church, and American Legion Post 30 were so important to him. Veterans need so much help. After graduating from Bradford County High school in Starke, Florida, Ken entered the University of Florida. He left after one year and served three years in the Navy on the Destroyer, The Noah. He then entered Florida Southern College in Lakeland, Florida. While attending school, he was a Lambda Chi Alpha fraternity member. He graduated deciding the boat Navy was not for him, he went in the Aviation Navy. It was perfect. He entered in Pre-flight in Pensacola Florida. He graduated as a CIC Officer and Navigator. He was very happy with the Flight Navy. He had several duty stations. His favorite was the Navy Hurricane Hunters. In the 1960’s, the plane actually penetrated the storm and got all kinds of data to help trace the storms. He has several duty stations but returned to Pre-Flight as an instructor twice. Ken loved to sing and was in the church choir everywhere we were stationed, even the Pre-Flight Choir. He was a charter member of the Barbershop Choirs here in Albany, and sang with several quartets. Ken sang 2 services with the First United Methodist Church choir for over 20 years. He was a member of the Albany Chorale for 15 years. Singing was a favorite hobby. He traveled to several states for Barbershop Competitions. His first duty station was Argentia, Newfoundland, Canada. Then to Roosevelt, Puerto Rico with the Hurricane Hunters. Survivors include his wife, who was a native of Pelham, GA, Marion Akridge Tyus, Albany, daughter Susan Tyus Brown and (Chet) of Woodstock, Georgia; son H. Kenneth Tyus Jr. of Woodstock, Georgia; granddaughter Leah Brown of Brunswick, Georgia. In Lieu of Flowers, Please send contributions to First United United Church, 307 Flint Ave., Albany, GA 31701, or The American Legion Post 30, 2916 Gillionville Rd., Albany, GA 31721. Military honors will be provided by the American Legion Post 30.

The family of LCDR Howard Kenneth Tyus, Sr. created this Life Tributes page to make it easy to share your memories.