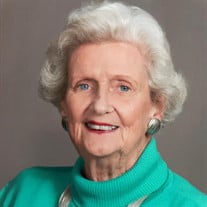 Helen Louise Gross McCormack, 94, passed away peacefully at her home on Tuesday, November 16. A funeral mass will be celebrated at St. Teresa’s Catholic Church at 11 AM on Friday, November 19th. A 6 PM Rosary service and visitation will be held on Thursday, November 18th at Kimbrell-Stern in Albany. Louise was born in Baltimore, Maryland on April 23, 1927 and was the youngest daughter of the late William Wentworth Gross and Helen Hoblitzel Gross. Her family traces their lineage back to 1620 and the Jamestown Settlement. She was preceded in death by her husband Robert Emmett (Bob) McCormack, Jr., president of Bobs Candies, Inc., her sister, Mary Gross Williams of Fayetteville, AR, her brother, William Wentworth Gross, Jr. of Tampa, FL and her grandson, Bryce Steven McCormack of Salt Lake City, UT. She graduated from Notre Dame of Maryland and studied at Bard Avon Business College. She met Bob at the US Naval Academy at Annapolis, MD where he was a midshipman. In 1947, after his naval service in World War II, they were married in the Chapel at the Academy and moved to Albany. Except for two years, when Bob again served in the Navy during the Korean War, they lived in Albany, GA for their entire lives. Louise was active in community organizations and activities. She served on the Board of Directors of Girls, Inc., the USO, the Flint River Girl Scout Council, the Charity League, the Community Concert Association and the Darton College Foundation. She was a member of the Junior League of Albany. She was a partner with and colleague of her husband in his positions of leadership in the candy industry, the church and in local civic and arts organization. A lifelong member of St. Teresa’s Catholic Church, she served on the committee to redesign the sanctuary. She and her husband were active members and leaders in the St. Teresa’s School PTA for many years while their children were students there. She was a loyal volunteer at the Soup Kitchen at St. Claire’s Community Center for many years. With an outgoing and friendly personality, Louise had a wide circle of friends, each of whom she cherished. Especially dear to her heart were the group of close friends who formed the Thursday Bridge Club which met weekly for more than fifty years. They marked important events together, sharing family weddings, anniversaries, birthdays, graduations and special occasions. Louise was a devoted mother and gracious home-maker. She loved golf and tennis. She is survived by her four children: Robert Emmett McCormack, III (Creel) of Atlanta, GA, Mary Helen Dykes of Albany, GA, William Gregory McCormack (Dina) of Park City, UT, Juliana Louise Roth (Ira) of Athens, GA, 9 grandchildren and 6 great-grandchildren. Louise and her family are grateful for the love and skilled attention of her wonderful caregivers led for more than 11 years by Felecia Williams. This team of incredible women cared for Louise with love and compassion and we are forever grateful for them in helping to make her final days comfortable and peaceful. Internment will be at Crown Hill Cemetery. Memorial donations may be made to St. Teresa’s Catholic Church, 421 Edgewood Lane, Albany, GA, 31707, St. Clare’s Center, 2005 Martin Luther King, Jr. Drive, Albany, 31701, or the organization of your choice.

Helen Louise Gross McCormack, 94, passed away peacefully at her home on Tuesday, November 16. A funeral mass will be celebrated at St. Teresa&#8217;s Catholic Church at 11 AM on Friday, November 19th. A 6 PM Rosary service and visitation will... View Obituary & Service Information

The family of Helen Louise Gross McCormack created this Life Tributes page to make it easy to share your memories.

Helen Louise Gross McCormack, 94, passed away peacefully at her...

Send flowers to the McCormack family.