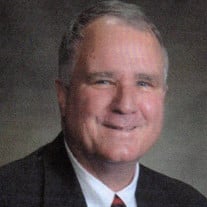 A memorial service for Harold R. (Huddy) Hudgens, Jr., who passed away on May 14, will be held at 11 a.m. on Saturday, May 18 at St. Paul’s Episcopal Church with visitation in the Parish Hall one hour preceding the service. A private interment will follow at a later date. Huddy was born on July 26, 1944 in Albany, Georgia, the son of Harold R. Hudgens and Katherine Cox Hudgens. He was a member of the Albany High School Class of 1963 and attended the University of Georgia where he was a member of Lambda Chi Alpha fraternity, graduating with a Bachelor of Science degree in Landscape Architecture. From 1968-1974, he was a member of the U.S. Army Reserve. Huddy began his career as an urban planner with Urban Consultants, Inc. in Montgomery, AL in 1969 and relocated to his hometown of Albany in 1972 joining the real estate firm of Tift & Westbrook and eventually forming Albany Land Co., Inc. as President/Broker in 1979. He served as President of the Albany Board of Realtors, was Realtor of the Year and was a member of that group’s Million Dollar Club many times. He was a member of the Georgia Realtors’ Land Institute and served as its President. He was an Accredited Land Consultant and a Certified Commercial Investment Member. Huddy served as a member of the Albany/Dougherty Planning Commission for six years -- three of those years as its Chairman. An Eagle Scout, Huddy served as an Executive Board Member of the Boy Scouts’ Chehaw Council for many years. A tireless advocate for donations to local scouts, he was honored with the Silver Beaver in 2009. He was a member of Leadership Albany and the Rotary Club of Dougherty County. In 1999, Huddy led a successful campaign for the establishment of the House of Hope, a residential facility serving the physically disabled through the Albany Advocacy Resource Center. As a dedicated member of St. Paul’s Episcopal Church, he served as an acolyte in his youth and on its vestry as an adult. Huddy was an avid Georgia Bulldog fan and enjoyed fly-tying, traditional country music, local history, and the Kinchafoonee Creek, which runs by his Lee County land. He had a love of collecting, in particular, an extensive map library. He is predeceased by his parents and is survived by two daughters (with Anita Mock Hudgens), Laura Hudgens (Jay Hedberg) of Atlanta and Holly Lynch (Jeremy); two granddaughters, Sydney and Flannery Lynch; his sister, Kathy Hitchcock (Gene), all of Albany; his niece, The Reverend Jessica Hitchcock (Mike Pilone) of Silver Spring, MD; his nephew, Reeves Hitchcock of Athens and his dear friend, Martha Hamilton Brown of Albany. In lieu of flowers, the family requests that those who wish to make memorials may do so to the Albany Advocacy Resource Center, St. Paul’s Episcopal Church or a charity of their choice.

A memorial service for Harold R. (Huddy) Hudgens, Jr., who passed away on May 14, will be held at 11 a.m. on Saturday, May 18 at St. Paul&#8217;s Episcopal Church with visitation in the Parish Hall one hour preceding the service. A private... View Obituary & Service Information

The family of Harold Reeves Hudgens, Jr. created this Life Tributes page to make it easy to share your memories.