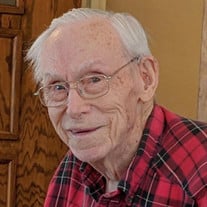 Today is the celebration of a life well lived and what would have been the 97th birthday of Grady Thomas (Tom) Bentley. Mr. Bentley, 95, of Americus passed away peacefully on Tuesday, March 24, 2020. The COVID pandemic, social distancing and safety for our loved ones certainly altered our usual and customary grief rituals. A private family service was held at Riverside Cemetery in Albany, GA on March 26, 2020 with Chaplin Albert Foster officiating. Tom was born April 2, 1924 in Redan, GA to Mabelle Owens Bentley and Grady Thomas Bentley. He was part of The Greatest Generation and a veteran of World War II serving in the U.S. Army Air Corp. He started his optical career with Bausch and Lomb Optical Company in Atlanta, GA. He went on to hold two positions with Southeastern Optical Company before joining Robertson Optical Laboratories in 1963. In March of 1969, he opened Robertson Optical Laboratories of Albany. He remained owner and vice-president until his retirement in 1989. His friends and colleagues respected him as a professional and gentleman. Tom was a Mason, Shriner and part of The Cartoon Capers. He was an active member of the Hasan Shriners and Triangle Lodge 708 until 2004. Tom and Mildred lived at Lake Blackshear for 35 years. While you had to track him down…he would eventually be found in the garden, tinkering in his shop or spending time with wonderful friends and neighbors. He was a travel enthusiast, avid vegetable gardener and volunteer. Tom never met a stranger and always had a story to tell. He was always filled with joy, a kind word and unceasing optimism. He is and forever will be missed. Tom left a mark on everyone he met. Tom was predeceased by his parents, two sisters, two brothers, his sons Larry Bentley, Albert McDonald, Stephen McDonald and his wife Mildred Hatcher Bentley. He is survived by his daughter Roberta Bentley of Houston, TX; sons Bill Bentley of Cleveland, GA; Rick Bentley of Walhalla, SC; Stanley McDonald of Albany, GA; Jerry (Claudia) McDonald of Oklahoma City, OK; Keith McDonald of Albany, GA; grandchildren, Mindy (Scott) Snyder of St. Petersburg, FL; Keith Bentley of Panama City, FL and Jennifer (William) Chumbley of Goodview, VA; Kellie (Casey) Chapman of Poulan, GA; Skye (fiancé Dale Ingram) Gardner of Warwick, GA; Marshall (Lindsay) McDonald of TyTy, GA; Hailey (Chris) Gutel of Oklahoma City, OK; Lacee (Albert) Harrison of Tuttle, OK; Madison McDonald of Oklahoma City, OK; Marlie McDonald of Oklahoma City, OK; Stephanie (Justin) of Blanchard, OK; Lindsay McDonald of Yukon, OK; Candie (Andy) Palmer of Grayling, MI; Mandie McDonald of Albany, GA; 22 great-grandchildren; six great, great-grandchildren and a host of nieces and nephews. “When the sun goes below the horizon he is not set; the heavens glow for a full hour after his departure. And when a great and good man sets, the sky of this world is luminous long after he is out of sight. Such a man cannot die out of this world. When he goes he leaves behind him much of himself.” -Beecher

Today is the celebration of a life well lived and what would have been the 97th birthday of Grady Thomas (Tom) Bentley. Mr. Bentley, 95, of Americus passed away peacefully on Tuesday, March 24, 2020. The COVID pandemic, social distancing and... View Obituary & Service Information

The family of Mr. Grady Thomas "Tom" Bentley Jr. created this Life Tributes page to make it easy to share your memories.

Today is the celebration of a life well lived and what would...

Send flowers to the Bentley family.