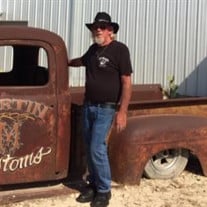 Glen “Tom” Thomas Bailey, 69, retired 30 year MGySgt in the Marine Corps, passed away Saturday, August 24, 2019 at Select Specialty Hospital in Gulfport, MS. Visitation will be held Friday, August 30, 2019 from 6:00 PM until 8:00 PM at Kimbrell-Stern. Funeral services will be held Saturday, August 31, 2019 at 10:00 AM at Kimbrell-Stern. Rev. Steve Hurley will officiate. Interment will follow at Crown Hill Cemetery. A fun loving father and grandfather who loved life to the fullest. In his retirement years he loved to travel the country and ride his Harley Davidson motorcycles. Tom, son of late Richard C. Bailey and Lois M. Bailey, grew up in Davenport, Iowa. At the age of 17 he dropped out of high school to join the Marine Corps where he served for the next 30 years. He was a Deseret Storm veteran deploying with one of the first units to leave for the war out of Beaufort Air Station, South Carolina. Later in his career in 1995 he was relocated to Marine Corps Logistics Base, Albany Georgia where he would eventually retire and reside for the remaining of his life. He was a member of The First Baptist Church of Albany and the Veterans of Foreign Wars organization. In lieu of flowers the family request a donation to the Salvation Army in his honor, 615 Slaters Lane, P.O. Box 269, Alexandria, VA 22313. Survivors include his daughter, Lisa Thomas and her husband, Farrell and his son, Brian Bailey and his wife, Stephanie, all of D’Iberville, MS, a daughter in law, Melanie Edenfield of Lee County, 8 grandchildren, Dylan Thomas, Alicia Thomas, Landon Sharp, Emma Bailey, Jonathan Bailey, Kolton Smith, Gracyn Bailey and Addison Bailey. Mr. Bailey was preceded in death by his wife, Sue Bailey, a son, Richard Bailey and a brother, Mike Bailey. To share your thoughts with the Bailey family, you may visit our website at www.kimbrellstern.com.

The family of Mr. Glen Thomas Bailey created this Life Tributes page to make it easy to share your memories.

Send flowers to the Bailey family.