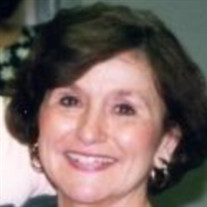 Gail Barlow Phillips passed away peacefully after a lengthy illness on Sunday, December 12, 2021. The service will be Saturday, December 18 at 11:00 a.m. at Saint Paul’s Episcopal Church. Visitation will be held immediately following the service in the Parish Hall. Private interment will be in Saint Paul’s Memorial Garden. Born in Albany, Georgia on June 13, 1935, she was preceded in death by her parents Lee Ann Elizabeth and Joseph W. Barlow, her sisters; Barbara Strickland and Theresa Stritz, her brothers; Alan W. Barlow and Joseph Neal Barlow, and her son-in-law Mike McComb. Longtime beloved Dougherty County School System employee, Gail served in several positions for over thirty years, retiring as Purchasing Agent. An active faithful member of Saint Paul’s Episcopal Church, Gail served on the Vestry, as Chair of the Fellowship Committee, and on the Search Committee, and volunteered in the Soup Kitchen. She was a member of the Daughters of the King and made her Cursillo many years ago. Gail was a member of the Ladies Auxiliary of the Elk’s Lodge #713 and served on many boards including the Anchorage and the Dougherty County Credit Union. Short in stature but full of energy, Gail will long be remembered for her love of music, dancing, traveling, birdwatching, and wildlife. One of her greatest pleasures was sitting and feeding deer and birds and communing with nature. So it's not surprising that she rode a camel to see the pyramids in Egypt. Gail was a fabulous cook and known for many delicious creations, including family favorites cheesecake, cat-head biscuits, whipped potatoes and fried chicken. She amazingly could cook a complete meal in less than one hour. She was intensely creative. She was an attentive, loving Mother, Grandmother and Great Grandmother. She loved and adored her Family. She is survived by her daughters Paula McComb and Theresa Rief (Tom) of Albany and her husband Brinson Phillips of Albany and stepdaughters Benita Dyes (Gary) and Valerie Foster (Randy), and three granddaughters Liz Knight (Charlie) of Leesburg, Ga., and Katie Jones (Kevin) of Leesburg, Ga and Lindsey Johnson (Seaborn) of Auburn, Al, eight great- grandchildren, three step-grandchildren , three step -great grandchildren and her dear Jack Russell Terrier, Nala. Memorials may be made to Saint Paul’s Episcopal Church, 212 N. Jefferson St, Albany, Ga., 31701, your local Humane Society or the charity of your choice.

Gail Barlow Phillips passed away peacefully after a lengthy illness on Sunday, December 12, 2021. The service will be Saturday, December 18 at 11:00 a.m. at Saint Paul&#8217;s Episcopal Church. Visitation will be held immediately following... View Obituary & Service Information

The family of Gail Barlow Phillips created this Life Tributes page to make it easy to share your memories.

Gail Barlow Phillips passed away peacefully after a lengthy illness...

Send flowers to the Phillips family.