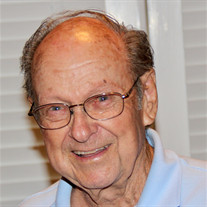 Franklin Tyson, 90, of Albany, died Monday, October 25, 2021. His funeral service will be at 3 PM on Thursday, October 28, 2021 at Kimbrell-Stern with a private, family only interment to follow. Lance Walker will officiate. The family will receive friends prior to the service on Thursday at Kimbrell-Stern beginning at 2 PM until the funeral hour. Mr. Tyson was born in Nashville, GA and had lived in Albany since 1955. He worked as Parts Department Manager at Lilliston Implement Corp./Bush Hog for 38 years. He was a Navy veteran and was stationed at Port Hueneme, CA. Mr. Tyson was a former member of the Flint River Sportsman Club. His favorite hobby was fishing. He enjoyed hosting fish fries for his family, and he enjoyed smoking turkeys for them at Thanksgiving and Christmas. He was a NASCAR fan. He was preceded in death by his wife, Patricia Casey Tyson. Mr. Tyson is survived by his daughter: Linda Walker (Glenn), Albany; 2 sons: Casey Tyson, Albany, Phil Tyson (Stephanie), Albany; 5 grandchildren: Reese Walker (Angie), Macon, Lance Walker (Brooke), Atlanta, Grant Walker (Callie), Albany, James Tyson (Kelsie), Athens, Joyner Freeman (Chandler), Canton, GA; 7 great grandchildren: Elizabeth, Tyson, Campbell, Caleb, Cory, Charlotte, and Lanier Walker. The family expresses thanks to their special caregiver, Kwajalein Guest, as well as to the Phoenix at Albany staff. Those desiring may send memorials to the Flint RiverKeeper, Inc., 102 Pine Ave., Albany, GA 31701. You may sign the online guestbook at www.kimbrellstern.com.

Franklin Tyson, 90, of Albany, died Monday, October 25, 2021. His funeral service will be at 3 PM on Thursday, October 28, 2021 at Kimbrell-Stern with a private, family only interment to follow. Lance Walker will officiate. The family will... View Obituary & Service Information

The family of Franklin Tyson created this Life Tributes page to make it easy to share your memories.

Send flowers to the Tyson family.